The Portobello Road market with over 1,000 dealers selling all kinds of items is one of the largest markets in London and since the late 20th century had attracted a large number of visitors from London and overseas.

The market is situated in the trendy London district of Notting Hill and is surrounded by a large number of pubs, cafes and restaurants.

The area takes it name from the Porto Bello Farm which was built-in the area which was named after the town of Porto Bello in Panama, captured by the British from the Spanish in the 18th century. For much of the 18th and 19th century, Portobello Road was a country lane in a rural area.

Gradually in the 19th century, residential development began to take place in the Portobello Road area, with a number of terraces and crescents built for the increasing numbers of wealthy people attracted to the district.

Up until the 1940s, Portobello Road market was similar to many other London markets and mainly sold food and other essential items. However after the war, traders selling antiques and bric-a-brac and antiques began to sell their wares and gradually Portobello Road Market became known as a place to pick up antiques. 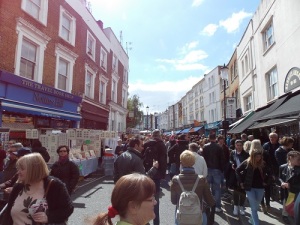 In the later half of the 20th century, Portobello Road was transformed from run-down district to being to one of most affluent, fashionable and desirable areas to live in the capital. The new residents spending power attracted young fashion designers who began to trade at the market selling designer and vintage clothing.

Each day attracts different traders, Saturday is the busiest day and attracts large crowds. In the market is a large number of street food stands and plenty of live music along the trail of the market.

The market is packed with stalls from Westbourne Grove all the way up to and along Golborne Road, and across under the Westway out to Ladbroke Grove. 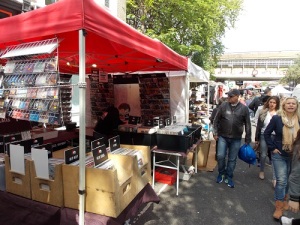 Portobello Green has a market selling mostly vintage clothing and bric-a-brac -no street market in Portobello or Golborne Roads.

Most cafes/shops are open + some forecourt traders at the southern end of Portobello Road.

Portobello market and Golborne market is half-day on Thursdays, with stalls closing by 1pm.

There’s a choice of two underground stations: Ladbroke Grove (Hammersmith & City Lines) or Notting Hill Gate, which is on the Central, Circle and District lines.

By londonvisitors2014 in Markets of London on June 1, 2016.
← Exhibition Review – Bhupen Khakhar: You Can’t Please All at Tate Modern from 1st June to 6th November 2016 Review : Camden Market →