For those looking for variety in a weekend escape,  Milan can offer world-class fashion, design, sport , one of the most famous opera houses in the world, acclaimed food and drink, numerous churches, art galleries and museums.

There are many flights to Milan from the major London airports and the travelling time is around two hours, Milan is served by two main airports, Linate which is only around  five miles from the city centre which is mainly used for domestic and short-haul international flights and Malpensa International Airport which is located  45 km (28 mi) from the centre of Milan.  Malpensa is an international hub and the second-busiest airport in Italy and is connected to the city by the Malpensa Express railway service.

We flew into Linate and took the local 73 bus which takes passengers to near the Duomo Piazza, this is the inexpensive approach, for a quicker entrance to the city there are plenty of taxi options but these can be rather expensive and poor value for money. Milan is the destination for around 8 million overseas visitors every year and offers an extensive tourist infrastructure with a large number of hotels, bars and restaurants in different prices ranges. 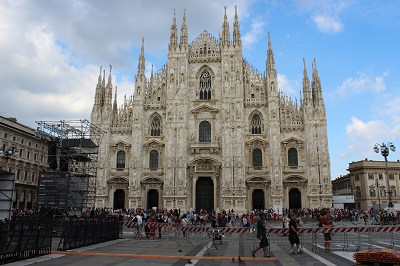 After visitors arrive in Milan, they usually make their way to the Piazza del Doumo marvel at the façade of the Cathedral and take a glimpse inside the monumental Victor Emmanuel II Gallery. Milan Cathedral is one of the important symbols of the city and is the fifth largest cathedral in the world. Construction began in 1386 and was finally completed in the 19th century. Part of the reason for the long completion time was the enormous complexity of a structure that is 158 metres long, 93 metres wide and has 3,400 statues and 135 spires.  Visitors pay a small amount to enter the Duomo but for 13 euros, you can take a lift up to the roof.

If the sights of all those spires make you dizzy, make you way to the nearby Galleria Vittorio Emanuele II which is considered one of the world’s first shopping malls and created a remarkable covered public walkway between the city’s cathedral and the La Scala opera house. The shops are now populated by some of the most luxurious brands and the restaurants are famous for serving Milan’s elite and those visitors willing to pay the high prices. 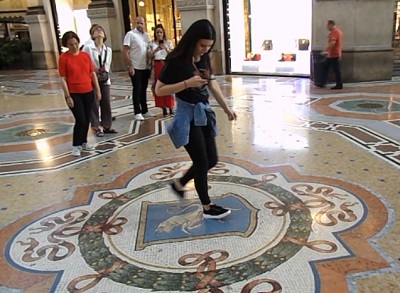 On the centre of the gallery is mosaic paving with the crests of the House of Savoy, do not be surprised if you see the odd person spinning on one of the mosaics. The mosaic features a bull and according to local tradition, the Milanese ensure good luck by spinning on the bull’s testicles. 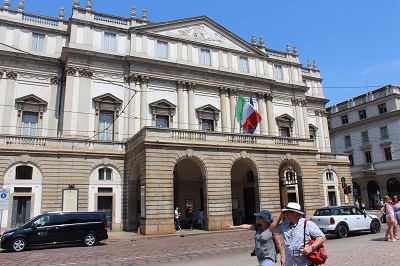 Walking to the other side of the gallery, you find yourself In the Piazza della Scala, the square was created in 1858 to allow visitors to fully appreciate the world-famous La Scala Opera House and the Victor Emmanuel II Gallery. At the centre of the square is a monument to Leonardo da Vinci by Pietro Magni. The Teatro alla Scala  is considered one of  Europe’s most prestigious opera houses and although it suffered considerable damage in the Second World War it was rebuilt to its former glory. Getting tickets for the main opera evenings can be both difficult and very expensive, however it is worth attending a classical or other concert to enjoy its unique surroundings.

For those who enjoy some retail therapy, take a walk to the side of the opera house to find some of the most famous shopping streets in Milan. Milan is considered one of the fashion capitals of the world and many of the most famous Italian fashion brands, such as Valentino, Gucci, Versace, Prada, Armani and Dolce & Gabbana, have a presence in Milan’s main fashion district centred around Via Monte Napoleone, Via della Spiga, Via Manzoni and Corso Venezia.

Away from the hustle and bustle of people, a quiet retreat can be found in Sempione Park which covers over 40 hectares.  The park was constructed in 1890 and was the location of the 1906 World Fair. It is a mixture of water features and winding paths with an interesting selection of trees where you can shelter from the burning sun in the summer. 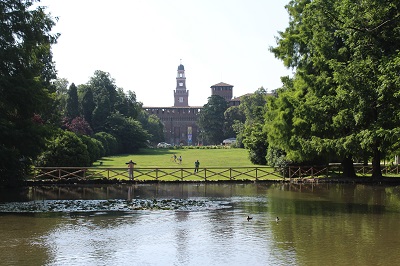 From the park, there are views of some of the iconic Milan landmarks such as Castello Sforzesco, Arco della Pace, Triennale and Torre Branca.

Castello Sforzesco provides some evidence of the political importance of Milan, the imposing castle is a monumental reminder of the city’s ancient defence system. The structure was began in the 14th century and enlarged by Francesco Sforza in the 15th century. Leading artists such as Leonardo da Vinci were invited to work in the castle. The huge complex is free to enter and now houses a number of museums.

Other cultural highlights are Pinacoteca di Brera which is one of Milan’s most important art galleries, Santa Maria delle Grazie refectory houses Leonardo da Vinci’s famous Last Supper. Due to the deteriorating state of the painting, very limited groups are allowed to view at one time. If you want to see the painting, it often involves booking months in advance. 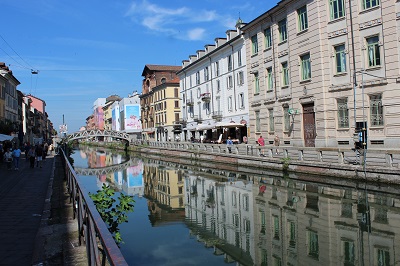 For slightly different experiences, we would recommend the ‘Navigli’ canals which were transport hubs for centuries and are now part of the “navigli” district whose art and craft workshops, markets, restaurants, bars and nightclubs make it one of the most bohemian and vibrant parts of the city.

Sports fans may know the San Siro stadium but a visit to the area offers some unusual delights.  The area has been a centre of sport for almost a century and one of the more unknown attractions is the San Siro Ippodrome. The present main grandstand was built-in the 1920s and the Art-Nouveau stands and relaxed atmosphere is a great day out, even better admission is usually free. 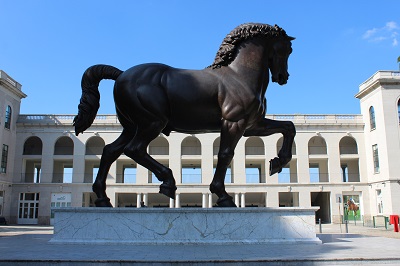 Dominating the entrance is a remarkable large bronze horse which stands more than seven metres ( nearly 23 feet ) high and was built-in the USA under the supervision of the sculptress Nina Akamu. The sculpture is based on Leonardo da Vinci drawings for an equestrian monument dedicated to Francesco Sforza.

Before racing, take a wander across the road to look around the unique San Siro stadium, although it was renamed the Giuseppe Meazza, it is still known around the world by its old name. 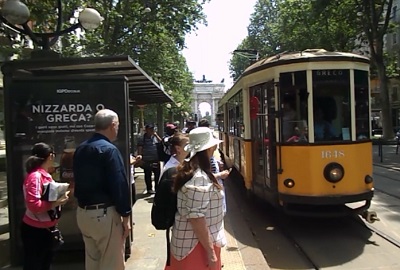 Milan is one of southern Europe’s key transport hubs with high-speed rail links to many other Italian and international cities.  Azienda Trasporti Milanesi (ATM) provides an integrated  transport network in Milan; it operates 4 metro lines (Milan Metro), 18 tram lines, 67 urban bus lines, 4 trolleybus lines, and 52 interurban bus lines. Some of the old trams especially the number one is well worth a ride through the city.

Unlike some other Italian cities, Milan provides an interesting mixture of old and new with a fascinating history and being a leader in fashion and number of other areas. Milan is one of the most the most cosmopolitan and multicultural cities in Italy and offers an ideal weekend escape all through the year.

In our travel section, Visiting London Guide.com gives advice to those who like to use London as a base to discover other places in the UK and Europe. One of the delights of the UK and Europe is that the distances between major destinations tend to be relatively short, flying from London you can easily be in Paris, Rome and Amsterdam within a couple of hours. The same is true with trains within the UK, within one hour you can visit Windsor, Oxford or Brighton.