Home » Markets of London » Leadenhall Market in the City of London

Leadenhall Market in the City of London 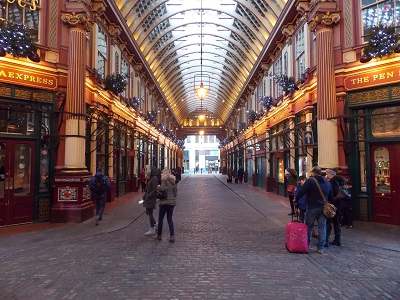 Leadenhall Market is located in the City of London and occupies a site that was once at the centre of Roman London.

In the early 14th century, the site was within the Manor of Leadenhall which belonged to Sir Hugh Neville. It was around this time that it developed a market for poulterers and cheesemongers.

The famous Lord mayor Richard ‘Dick’ Whittington gave Leadenhall to the City in 1411 and the market grew considerably to provide a site for selling poultry, grain, eggs, butter, cheese, herbs and other foodstuffs. Over the next 200 years Leadenhall Market attracted markets for wool, leather and cutlery.

Although Leadenhall Market only suffered slight damage in the Great Fire of 1666, it was partially rebuilt as a covered structure and was divided into the Beef Market, the Green Yard and the Herb Market.

In 1881 the City’s architect Sir Horace Jones redesigned Leadenhall Market replacing the earlier stone structure with wrought iron and glass structure which in 1972 was given Grade II heritage listed status.

The Poultry Market remained at Leadenhall until the 20th century and the market was famous for the sale of meat, poultry and fish. However, by the mid-20th century the shops began to be used for general retailing and by the 21st century, the meat market had disappeared and Leadenhall Market had evolved into one of the City’s upmarket shopping centres.

A common saying is that Leadenhall Market is famous for Tom, Dick and Harry.

During the 19th century ‘Old Tom’ was a celebrated character in Leadenhall. He was a gander who managed to escaped being slaughtered at the market. He became a local celebrity until his death in 1835 at the age of 38, he lay in state in the market and was buried on the site. 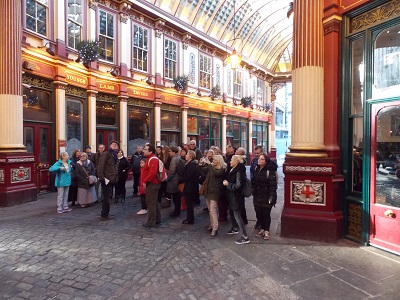 Dick is famous former Lord mayor Richard ‘Dick’ Whittington who gave Leadenhall to the City in 1411.

Harry is Harry Potter, Part of Harry Potter and the Philosopher’s Stone was filmed in Leadenhall Market in 2000/2001. The market was used to represent the area of London leading to the wizarding pub The Leaky Cauldron and magical shopping street Diagon Alley.

Leadenhall Market is one of the most attractive old fashioned Victorian markets and is full of shops and other attractions.