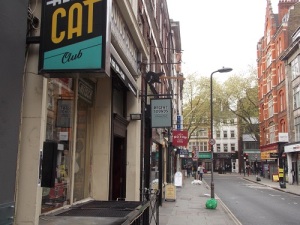 Denmark Street is a street on the edge of London’s West End near to Tottenham Court Road station. The street origins date from the 17th century and was named after Prince George of Denmark. Although historically it had a number of famous residents including the painter Johann Zoffany and Augustus Siebe, who pioneered the diving helmet, in the 20th century it became associated with British popular music.

From the 1950s, the street became known as Britain’s “Tin Pan Alley” and housed a large number of music publishers’ offices. When this market declined in the 1960s it became home to music shops and recording studios. The Rolling Stones recorded at Regent Sound Studio and the Gioconda café became a well known meeting place for musicians that included David Bowie, Jimi Hendrix and the Small Faces. 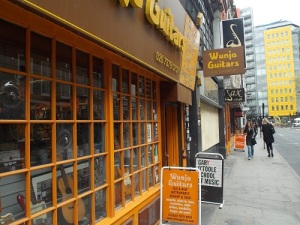 In the 1970s, Malcolm McLaren and The Sex Pistols rehearsed in the street and cult comic and science-fiction bookshop, Forbidden Planet opened their first shop in 1978 . Well respected music papers, the Melody Maker and the New Musical Express began from offices in the street.

In the 1980s and 1990s, the street declined as a hotbed for new talent and became known for its instrument shops. Recent development of the area has led to the closure of the well loved 12 Bar Club and Enterprise Studios but a number of instrument shops  are still trading.

London Visitors is the official blog for the Visiting London Guide .com website. The website was developed to bring practical advice and the latest up to date news and reviews of events in London.
Since our launch in 2014, we have attracted thousands of readers each month, the site is constantly updated.
We have sections on Museums and Art Galleries, Transport, Food and Drink, Places to Stay, Security, Music, Sport, Books and many more.
There are also hundreds of links to interesting articles on our blog.
To find out more visit the website here