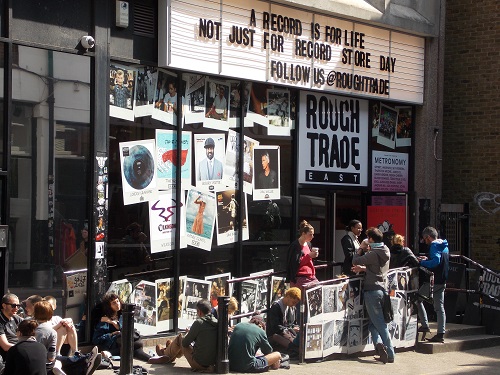 Rough Trade are two independent record shops in London, the shops origins lie in 1976 when Geoff Travis opened The first Rough Trade shop in Ladbroke Grove. In 1978 they went on to form record label Rough Trade Records which was home to The Smiths amongst others.

In 1982 the Record label and the shop separated but they still have strong links, at this time the shop moved from its original location to the nearby Talbot Road. In 1988 a shop was opened in  Covent Garden. which closed in 2006, however  in 2007 they opened a shop called Rough Trade East  in  Brick Lane in East London.

Rough Trade specialises in the carrying items over a range of genres, mostly within the alternative or underground scenes.

The shop, called  Rough Trade East is located in the former  brewery in  Brick Lane and often puts on free music gigs on a high-spec stage, allowing for an audience of 200. The shop specialises in selling Music from up and coming bands and in all formats but especially vinyl. The Shop has a café and a sitting area to encourage people to use the shop as a meeting place.

As well as their two shops in London, Rough Trade opened a store in New York  in 2013.

Rough Trade specialises in the carrying items over a range of genres, mostly within the alternative or underground scenes. They take great pride of being outside the music mainstream and developing young talent , this attracts a noticeable loyal following.

If you want more information about Rough Trade , visit their website here