Exhibition Review – The World Exists to Be Put On A Postcard: artists’ postcards from 1960 to now at the British Museum from 7 February to 4 August 2019 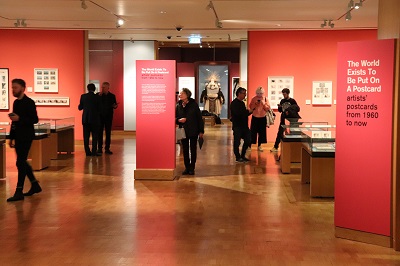 The British Museum presents the first survey of postcard art to be held in a major museum in the UK. The free exhibition entitled The World Exists to Be Put On A Postcard: artists’ postcards from 1960 to now features over 300 postcard works of art from some of the most famous artists of the past five decades including Gilbert & George, Susan Hiller, Guerrilla Girls, Tacita Dean, Yoko Ono, Bruce Nauman, Dieter Roth, Gavin Turk and Rachel Whitehead. Many of these pieces will be on display for the first time. 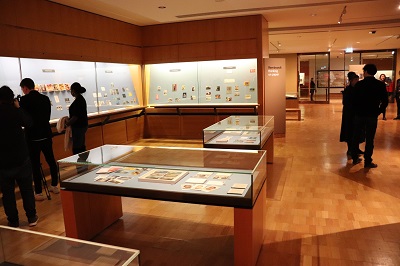 The works in the exhibition are drawn from a major donation of over 1,000 artists’ postcards collected by writer and curator Jeremy Cooper. It was Cooper’s intention, this overlooked medium should be preserved for posterity. The collection which took 6 years to assemble is considered one the world’s leading collections of this art form. 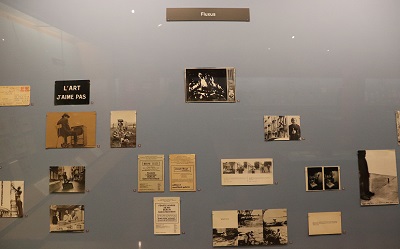 Vast numbers of artists have created postcard art since the 1960s, but it has been a largely ignored element of contemporary art. Some of the earliest artists who used postcard art were from the Fluxus network of artists and musicians. A number of key avant-garde artists in the 60s took part in Fluxus, including Joseph Beuys, Dick Higgins, Alice Hutchins, Yoko Ono, Nam June Paik, Ben Vautier, Robert Watts, Benjamin Patterson and Emmett Williams. 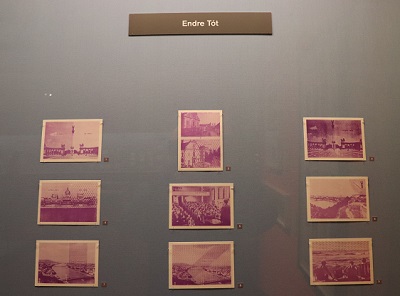 Endre Tot is featured in the exhibition participated in the Fluxus movement and became well known for his Mail art project which used media like telegrams and picture postcards. 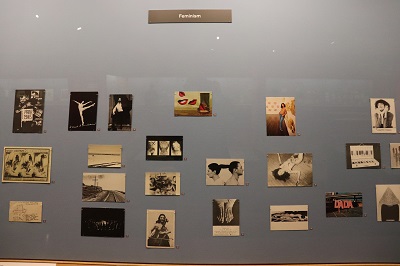 The rise of identity politics in the late 20th century saw a number of postcards to send messages, feminists used the medium of postcards to challenge the accepted portrayal of women in the media. 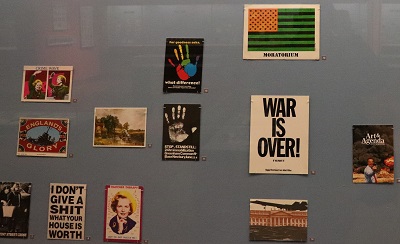 Anti War sentiment led to a large number of political postcards including Yoko Ono and John Lennon’s War is Over! and Jasper John’s anti-Vietnam war work Art for the Moratorium. 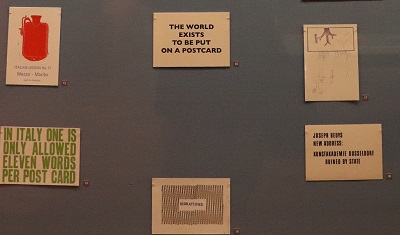 Although the postcard was perfect for short messages as the graphic postcards section illustrates, it was also used for bigger ideas, the exhibition features work that deals with more conceptual issues. 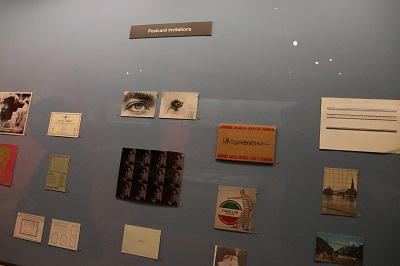 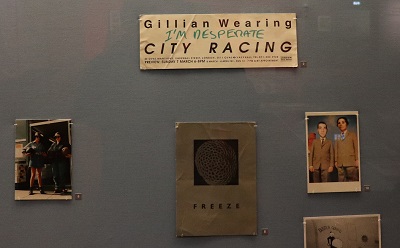 Gillian Wearing and Gilbert & George are some of the artists of today who use postcards to get their particular message across. 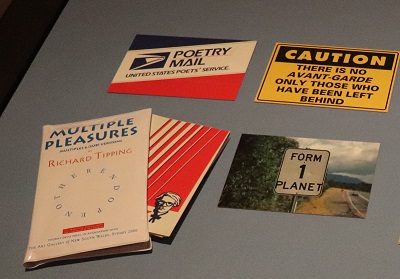 This interesting exhibition provides plenty of evidence that well before the internet, artists were using common forms of media like postcards to send  subversive, political and  social messages. The exhibition illustrates that the decline of  the once ubiquitous postcard for digital forms of communication means that this kind of printed ephemera will quickly disappear. This small free exhibition allows visitors the opportunity to see some of the more interesting examples of a largely forgotten medium of contemporary art.

Exhibition Review – Tacita Dean: STILL LIFE at the National Gallery from 15th March to 28th May 2018 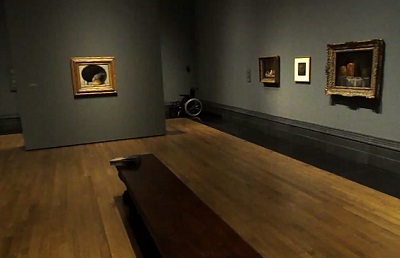 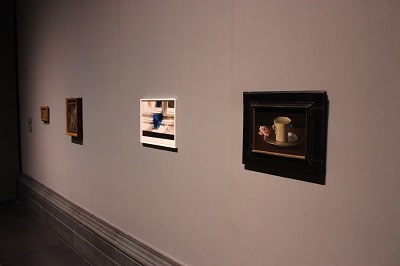 Tacita Dean: STILL LIFE provides the unusual situation that Dean acts as both artist and curator in this National Gallery exhibition. In the role of curator Dean brings together a diverse selections of works to explore the genre from 17th century paintings like Francisco de Zurbarán’s Cup of Water and a Rose (about 1630) to contemporary pieces in a variety of mediums, by the artist herself or by her contemporaries like Thomas Demand, Roni Horn and Wolfgang Tillmans. 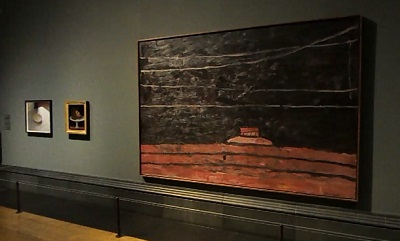 Dean uses the exhibition to question some of the concepts of still life and examine its legacy within the history of art. 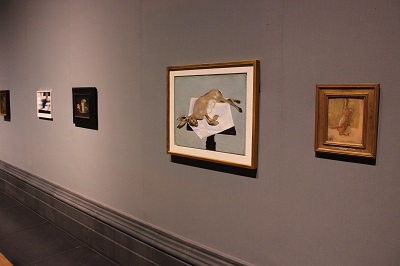 Dean illustrates that placing pictures together with some similarities in subject matter can convey very different meanings that change over time. Walter Sickert’s A Dead Hare  and John Craxton’s Hare on the Table (1944-45) illustrate that the symbolism of death and mortality prevalent in early paintings can be drastically changed in more modern interpretations. 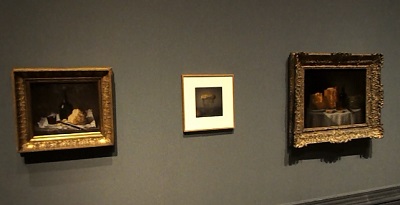 Cy Twombly’s Bread (2004) sandwiched between two old interpretations of still life’s featuring bread is another example of how religious or cultural symbolism changes over time. 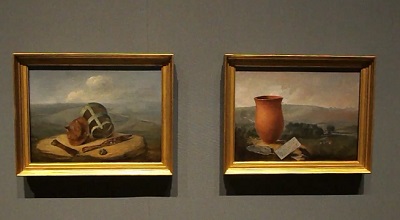 Some works show that taking still life outdoors with a landscape behind can have a transforming effect.

Dean contributes a new film diptych made especially for the exhibition, ‘Ideas for Sculpture in a Setting’, and ‘Prisoner Pair’ (2008, 16mm). 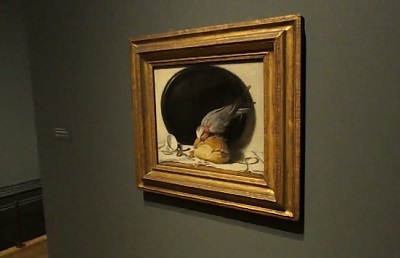 This small free fascinating exhibition offers the opportunity for visitors to question some of the fundamental concepts of ‘still life’. Dean suggests that the concept of still life is one that often changes over the history of art with associated symbolism part of the appeal of the genre. However it could be argued that the genre is open to more modern interpretations which can set the genre free, sometimes quite literally by taking the ‘still life’ outdoors into the landscape.

London Visitors is the official blog for the Visiting London Guide.com website. The website was developed to bring practical advice and latest up to date news and reviews of events in London.
Since our launch in 2014 , we have attracted thousands of readers each month, the site is constantly updated.
We have sections on Museums and Art Galleries, Transport, Food and Drink, Places to Stay, Security, Music, Sport, Books and many more.
There are also hundreds of links to interesting articles on our blog.
To find out more visit the website here