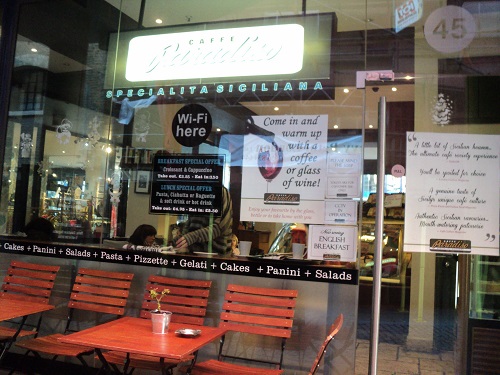 Although Caffé Paradiso is a relative newcomer opening in 2006, its has connections to a Sicilian couple who came to London in the 1930s. Rita and Enrico Olivelli opened their Bloomsbury restaurant in the 1930s which soon became a favourite of students from the nearby drama school RADA. Olivelli became famous for its Sicilian cuisine and when the restaurant was sold in 1993, two Sicilian – born brothers Giovanni and Salvatore Salamone bought it determined to continue the Sicilian tradition. Other restaurants followed in Mayfair and Waterloo and two cafes called Caffé Paradiso, one in Bloomsbury and this one at Tower Bridge.

What sets this Café apart from the numerous chains around it is the delicious handmade savouries and patisserie made to authentic Sicilian recipes. The gelato is made by Sicilian chefs in London.

Friendly staff, good coffee and even a breakfast menu make this one of the most popular cafes this side of Tower Bridge. The only problem you are likely to find is getting a seat in the small intimate surroundings. 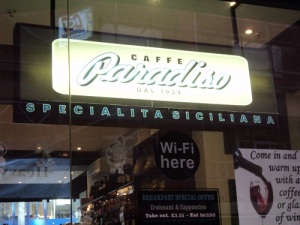 For practical advice and special offers for your London visit go to visitinglondonguide.com