Tag Archives: Review: The Renaissance Nude at the Royal Academy

Exhibition Review: The Renaissance Nude at the Royal Academy from 3 March to 2 June 2019

The Royal Academy of Arts present a new exhibition entitled The Renaissance Nude which explores how nudes have been used in some of the world’s most renowned masterpieces. The Renaissance Nude exhibition features around 90 works in a variety of media including paintings, sculptures as well as drawings, prints and illuminated manuscripts from different regions of Europe.

The exhibition examines the emergence of the nude visual tradition and how it changed the character and values of European art. The exhibition feature works by artists including Lucas Cranach the Elder, Albrecht Dürer, Jan Gossaert, Michelangelo, Raphael and Leonardo da Vinci.

Although nude sculptures have been common since ancient times, nude paintings have a less obvious history. Religious organisations in particular were keen that nudes should inspire belief and not titillate the congregation. The Renaissance Nude exhibition examines art made in North and Southern Europe and considers some of the contrasts between the two approaches.

The exhibition is organised around five main themes, The Nude and Christian Art focuses on episodes from the Old and New Testament. Humanism and the Expansion of Secular Themes is devoted to mythological stories and classical art. Artistic Theory and Practice explores life drawing and the study of anatomy and proportion. Beyond the Ideal Nude looks at the vulnerability of the human condition. The final section, Personalising the Nude highlights the role of Renaissance patrons.

Even though, the exhibition covers a relatively short period between 1400 and 1530, it quickly becomes apparent that the idea of the ‘Renaissance Nude’ is a little misleading. Many people would consider Titian’s Venus Rising from the Sea (‘Venus Anadyomene’), c. 1520 as representative of this view, however the exhibition provides evidence that nudes were much more diverse and often reflected ideas of beauty within a particular cultural group.

Albrecht Dürer’s engraving Adam and Eve, 1504, Lucas Cranach the Elder’s A Faun and His Family with a Slain Lion, c. 1526 and Jan Gossaert’s Hercules and Deianira, 1517 offers a more medieval view of the nude. The remarkable Jean Bourdichon’s Bathsheba Bathing take from the Hours of Louis XII, 1498/99 illustrates that even in sacred texts, visions of womanly beauty could be included.

It was probably in the depiction of mythological stories and classical art, that the nude was used most extensively and experimentally. Agnolo Bronzino’s Saint Sebastian, c. 1533, Jan Gossaert, Christ on the Cold Stone, c. 1530 and Pietro Perugino, Apollo and Daphnis, c. 1495 offer unusual depictions. 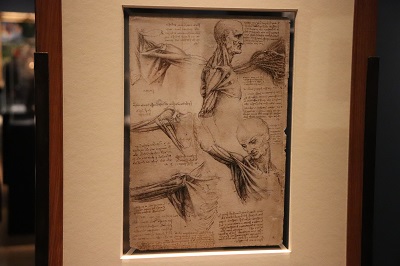 There were a number of artists who wished to go beyond the surfaces both literary and emotionally, the exhibition includes some of Leonardo da Vinci’s anatomical drawings and drawings by Raphael and Michelangelo.

This intriguing exhibition gives viewers the opportunity to see the Renaissance Nude in a different light. As the nude became an increasingly dominant role in the visual arts, it was used in a variety of sacred and secular contexts. Whether used in small, intimate objects to large decorative projects that filled church interiors and palaces, the Renaissance Nude led to a series of developments that led to new ideas of humanity and the human form.