The Royal Academy of Arts presents the first major exhibition of James Ensor’s work to be held in the UK in twenty years. Ensor is considered one of Belgium’s most important modernist artists, however his work is largely unknown in the UK. The exhibition is curated by the Belgian contemporary artist, Luc Tuymans, who will introduce a wide range of Ensor’s work.

The exhibition entitled Intrigue: James Ensor by Luc Tuymans will bring together 70 paintings, drawings and prints by the artist, the vast majority of which have been drawn from major Belgian collections.

Born in 1860 to an English father and a Belgian mother, Ensor was bought up in the coastal town of Ostend, where his family ran a curio shop. The objects in the shop fascinated Ensor who would use some of the objects as inspiration to create imaginary worlds in his paintings.

Although Ensor became a student at the Académie Royale des Beaux-Arts in Brussels, he tended to rebel against traditional art establishment and preferred the company of free thinking artists and intellectuals of the period. 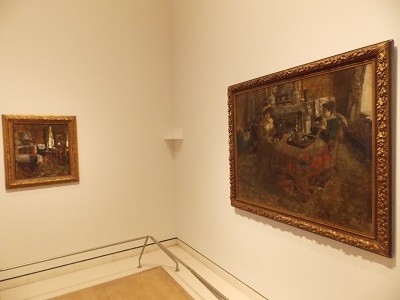 Some of Ensor’s first paintings were of the interiors of dimly lit Ostend homes especially The Bourgeois Salon (1880) and Afternoon in Ostend (1881). Next to the paintings is a screen showing Guillaume Bijl’s 2002 black and white film James Ensor in Ostend which portrays the elderly artist as a distinguished member of the Ostend society. 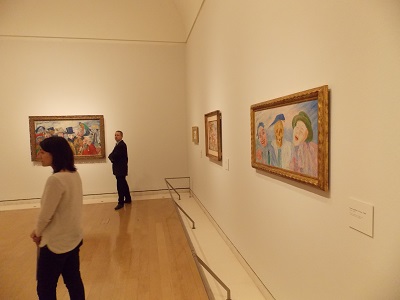 Whilst that may have been the case later in life, some of Ensor’s early works scandalised the generally conservative society. Some of his main targets were religion and the middle class, The Man of Sorrows (1891)  and the hand coloured etching of one of his most famous painting’s The Entry of Christ into Brussels in 1889 (1888-89) portray a less than favourable view of Christ’s standing in the local society. Certain members of that local society are lampooned in The Baths at Ostend (1890), The Bad Doctors (1892) and The Dangerous Cooks (1896).

Ensor in his Self-portrait with Flowered Hat (1883) portrays himself in a humorous  and playful manner, humour is an important factor in a large number of his works including The Intrigue (1890), Skeletons Fighting over a Pickled Herring (1891) and The Skeleton Painter (1896/97).

Ensor in many ways carried on in his own individual style without committing himself to a particular artistic style or school, although in 1883 he co-founded the progressive artist group Les Vingt.  His most productive period was the 1880’s up to the 1900, after this he pursued other interests and enjoyed his newly found status as a respected artist in Belgium. In 1929, he received the title of Baron from King Albert I and was influential for a number of younger artists including Wassily Kandinsky. 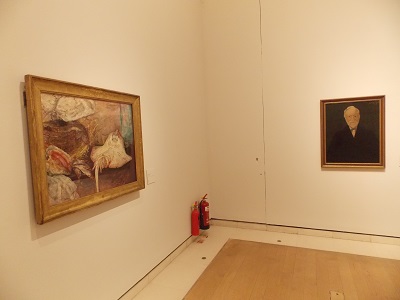 This fascinating exhibition will introduce Ensor’s work to a wider audience in the UK, whilst the artist’s work is exhibited in the rest of Europe, he remains underrepresented in UK national collections. Perhaps part of the reason for this is that Ensor is very difficult to categorise, although he shows elements of expressionism and surrealism in his work, they do not dominate and he is equally at home painting still life like The Skate (1892). Part of Ensor’s legacy is that he still inspires artists especially exhibition curator Luc Tuymans whose Gilles de Binche (2004) is in the exhibition with two works on paper by Belgian Symbolist painter Léon Spilliaert, Gilles de Binche carnival masks and a large feather headdress worn in the Carnival of Binche.

For more information or to book tickets, visit the Royal Academy website here