The Museum of London present a major exhibition entitled , Fire! Fire!, which opens 23rd July 2016. The exhibition marks the 350th anniversary of the Great Fire of London and explores London life on the eve of the fire, the dramatic events that took place as the blaze burned through a quarter of the city in 1666, and how London recovered from the devastation.

The exhibition begins in Pudding Lane and looks at how the fire started and spread over the next few days. A variety of objects from the fire are shown including a ceramic roof tile that was blackened, melted and bent in half indicating the great heat created from the inferno. Also shown are Burnt padlocks and keys made from iron, found at Monument House excavations on Botolph Lane, near Pudding Lane.

For a visual record of how the fire spread across the city, a large digital map shows the day by day progress.

One of the more unusual exhibits is a restored 17th century fire engine, originally built in London in the late 1670s by John Keeling, the only surviving part when the museum acquired the fire engine in 1928 was the central barrel and pump. The restoration was modelled on a 19th-century photograph of the engine which showed it still intact with its undercarriage, wheels, tow bar and pumping arms.

Although the loss of human life was small, the effects of the fire were catastrophic for many of the 100,000 who were displaced from their homes. Letters, books and paintings give voice to some of the great loss and sufferings experienced by the population. 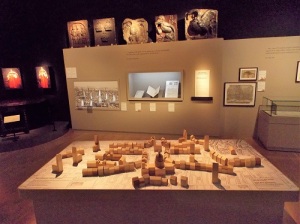 Rebuilding the damaged part of the City of London became a priority and plans from Sir Christopher Wren are shown to illustrate the mammoth task. 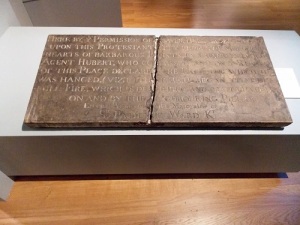 A plaque from the wall of a house in Pudding Lane provides evidence of people using the fire to further their own agendas , plaques and pamphlets suggested that the fire was started deliberately by Catholics to enable foreign powers to take over the city. Although there was no evidence that the fire was anything but an accident, some people looked for scapegoats to blame.

This intriguing and entertaining exhibition explores one of London’s most famous historical disasters from a number of ways. The attractive visual displays illustrate the way the events of September 1666 unfolded and how Londoners responded to the disaster and gradually rebuilt the city.

The exhibition is particularly attractive for families and children with plenty of interactive elements and a wide programme of fire themed walks and tours, lectures, workshops, family activities, children’s sleepovers and festival days.

The Story of the Monument in the City of London 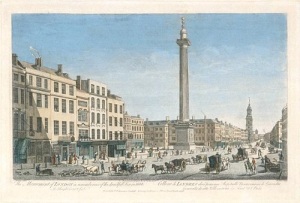 Sir Christopher Wren, Surveyor General to King Charles II and the architect of St. Paul’s Cathedral, and his friend and colleague, Dr Robert Hooke, provided the design for a colossal Doric column. Inside the column contains a stone staircase of 311 steps leading to a viewing platform. This is surmounted by a drum and a copper urn from which flames emerged, symbolizing the Great Fire.

As well as enabling visitors to the column to have a unique view of the City of London, Wren built a shaft to enable the Royal Society to conduct experiments into gravity and pendulum movement. The instruments in the shaft connected to an underground laboratory but ultimately the heavy traffic on Fish Hill rendered the experimental data unusable. 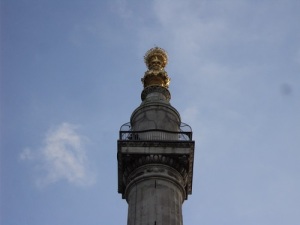 The viewing platform at the top was originally open, however a mesh cage was added in the mid-19th century to prevent people jumping off, after six people had committed suicide from the structure between 1788 and 1842. There was also an occasional accident, in 1750 William Green, whilst reaching over the railing of the balcony to look at a live eagle kept there in a cage, accidentally lost his balance and fell over to his death.

The Monument was not without its controversy when inscriptions added on the east side seemed to blame Roman Catholics for the fire, these offensive words were finally chiselled out in 1830.

In many respects, the Monument was the Shard of its day and was visited by thousands of people every year. Built from Portland Stone it managed to survive the bombing of the Second World War with minor damage. 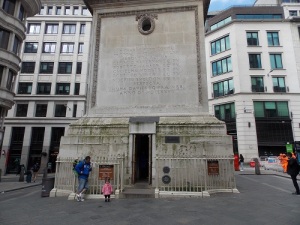 There may be taller structures in London but the Monument is one of the oldest and most interesting historically. It is also one of the cheapest with tickets only £4 for adults and £2 for children.

NOTE: Children of 13 years or younger must be accompanied by an Adult in order to climb the Monument.