A Short Guide to the National Gallery 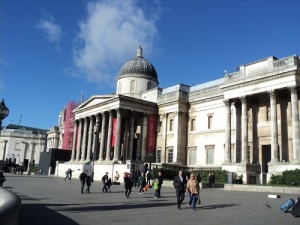 In April 1824 the House of Commons agreed to pay £57,000 for the picture collection of the banker John Julius Angerstein. His 38 pictures were intended to form the core of a new national collection which would be housed in a new building.
In 1831, Parliament agreed to construct the building for the National Gallery at Trafalgar Square which finally opened in 1838. The National Gallery had free admission and wished to appeal all sections of society. However its success led to calls to expand the building and subsequent wings were added in 1876, 1907, 1975 and 1991.

Although the collections of John Julius Angerstein and Sir George Beaumont provided the bulk of the National Gallery, in 1855 the new director Sir Charles Eastlake travelled throughout Europe to purchase pictures for the collection. Within 10 years  the Gallery’s collection of Italian painting was considered  one of the best in the world. 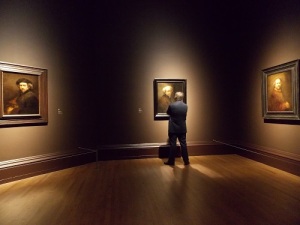 When the artist Joseph Mallord William Turner bequeathed over 1000 paintings, drawings and watercolours to the collection in 1856, it was  decided to exhibit British works in a separate premises. Eventually a site was found at Millbank and the Gallery opened in 1897. The new gallery was officially known the National Gallery of British Art, changing its name to the National Gallery, Millbank in 1917. The wealthy industrialist, Henry Tate, offered his collection to the nation and funded the gallery which led to the gallery later becoming known as the Tate Gallery. Therefore ironically the National Gallery at Trafalgar Square only possessed a small selection of British pictures as the majority were transferred to the Tate which up to 1955 was under the administration of the National Gallery.

Equestrian Portrait of Charles I – Anthony van Dyck  about 1637-8

Seaport with the Embarkation of Saint Ursula – Claude 1641

The Ambassadors – Hans Holbein the Younger 1533

The Battle of San Romano – Paolo Uccello probably about 1438-40

The Entombment – Michelangelo about 1500-1

The Virgin of the Rocks from Panels from the S. Francesco Altarpiece, Milan

Venus and Mars – Sandro Botticelli about 1485

Exhibition Review : Kenneth Clark – Looking for Civilisation at the Tate Britain, 20 May – 10 August 2014 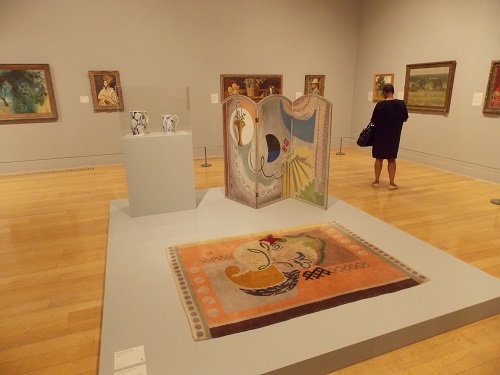 This Exhibition looks at the career and impact of Kenneth Clark (1903–1983), who is considered one of the most influential figures in British Art, It also considers Clark’s role as patron, collector, art historian, impresario, and broadcaster – a man who attempted to  bring art to a mass audience.

The exhibition features over 270 objects from works by the artists that Clark championed to those from his own eclectic collection, many of which are rarely on public display. Highlights include drawings by Leonardo da Vinci from the Royal Collection, Samuel Palmer’s A Cornfield by Moonlight with the Evening Star, c.1830, Paul Cézanne’s Le Chateau Noir c.1904, Edgar Degas’ Dancer looking at the sole of her foot 1900, cast 1928; and Lucian Freud’s Balcony Still Life 1951.

Kenneth Clark for the early part of his life followed the life prescribed by his status and position in British Society, he was born in London into a wealthy Scottish family who had made their fortune in textiles. After school he went to Trinity College Oxford to study the History of Art.

After a spell as fine art curator at Oxford’s Ashmolean Museum, he became the youngest ever Director of the National Gallery aged just 30.

The Exhibition begins  in Room 1 and looks at the portraits of Clark and his family and of the artistic influences on him in his formative years. It is an eclectic mixture of traditional (Constable and Palmer) the classical ( Leonardo, Belllini) and the exotic (Hokusai, Utumaro).

From these wide range influences when we move into Room 2 we consider Clark the Collector, whilst there is still a few traditional paintings Ruskin, Reynolds and Gainsborough. However the vast majority of the paintings are from the Impressionist school, artists such as Cezanne are heavily featured with Renoir, Degas and Seurat.

Room 3 looks at Clark the patron who begins to actively support artists financially and by championing the works of particular schools including the Bloomsbury Group and the Euston Road School. His patronage helped to develop the talents of British artists such as Henry Moore, Victor Passmore, John Piper and Graham Sutherland whose work is well represented in next Room 4  entitled the New Romantics  and considers the movements  in British Art  before the Second World War .

Artists exploring abstract interpretations of Landscapes can be contrasted with Room 5 War Time when the reality of war takes over .

It was at the outbreak of war that  Clark’s private patronage became the model for a state project through his instigation of several initiatives including the War Artists Advisory Committee. Employing artists to record the war, he commissioned such iconic works as Moore’s Shelter Drawings and Sutherland’s and Piper’s images of the Blitz..

After the war , Clark  began to consider how Art could inform the “Brave New World”  and  in 1969, he achieved international fame as the writer, producer and presenter of the BBC Television series, Civilisation, which pioneered television documentary series combining expert  narration with spectacular  photography on location.

In Room 6 we have some screens showing excerpts from the series and the rather stiff approach looks a little dated but was truly radical at the time and provided the blueprint for Art Documentaries for the next four decades.

The range of pictures, sculptures and decorative arts in this exhibition is incredible where Japanese Prints are virtually side by side with Leonardo drawings, then we have a wonderful collection of Impressionists paintings and sculptures by Rodin and Degas and finally almost a retrospective of British Art in the 20th century.

There is no doubt that Kenneth Clark had a great impact on British Art as a director, collector, patron and historian, however it was the ability to bring Art to wider audience that is perhaps his greatest legacy, the millions who visit the London Art Galleries and Museums are testament that the Arts  are for everyone, and this exhibition reflects how Kenneth Clark was important part of the movement that got that message across using the most influential media of the time.