© 2019 Visiting London Guide.com – Photograph by Alan Kean
Coal Drops Yard is a retail development that is part of the King’s Cross Central development scheme and is the latest part of the development to use old industrial buildings and adapting them for the 21st century. 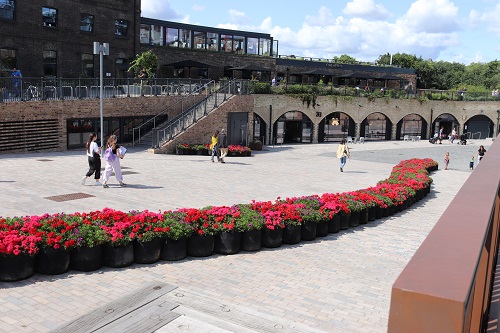 © 2019 Visiting London Guide.com – Photograph by Alan Kean
The coal drops were sheds that received coal shipments, mostly from the north of England by train and then were transferred to waiting narrowboats on the Regents Canal and to horse-drawn carts. In the Victorian times, coal was the main form of energy to heat and light the buildings of London.

© 2019 Visiting London Guide.com – Photograph by Alan Kean
The coal drops were built in the mid 19th century and were part of a large industrial complex which included stables for up to 1500 horses. By the end of the 19th century, the coal drops became obsolete and the buildings were used for warehousing. In the last part of the 20th century, some of the disused warehouses were used to stage illegal raves and were used as bars and clubs. By the 21st century, the rave scene had run its course and the warehouses became derelict again.

© 2019 Visiting London Guide.com – Photograph by Alan Kean
As part of the large development of the King’s Cross Central site, Argent group appointed Thomas Heatherwick as architect for the redevelopment of the Coal Drop Yards as a retail park in 2014. Work was completed and the development opened in 2018.

The £100m project converted the listed Victorian sheds into a new high-end, 9,290 sq metre, shopping complex, Thomas Heatherwick developed a way to bring together the two converging arcaded sheds with a ‘kissing roof. The slate used in the roof comes from the same seam in the same Welsh slate quarry as was used in the original roof. 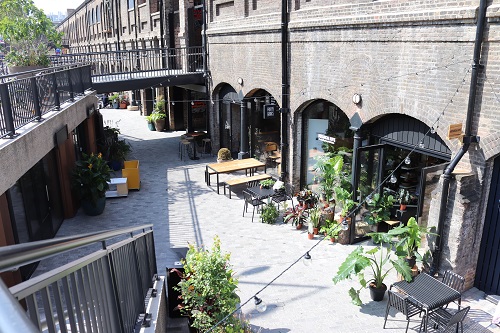 © 2019 Visiting London Guide.com – Photograph by Alan Kean
What sets this retail development apart is the way that the Victorian industrial buildings give the place character, it seems a world away from the rather soulless shopping centres with the canal adding even more interest. The King’s Cross area has been totally changed in the last 25 years from one of the most depressing parts of the capital to an area full of interest and a welcome diversion to those using the nearby train stations. 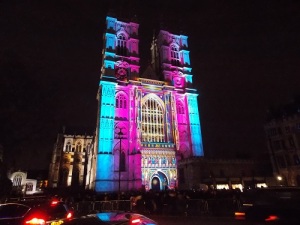 The Lumiere London Festival on Saturday became a victim of its own success when ten of thousands of people descended on the artworks at 30 different locations across the capital. Installations were temporarily switched off especially around the Kings Cross area.

It is the first time the festival of lights has been held in London and on a cold winter’s night it proved to be an irresistible attraction for many thousands of people. The illuminated art was mainly found in Piccadilly, Mayfair, King’s Cross, Trafalgar Square and Westminster. 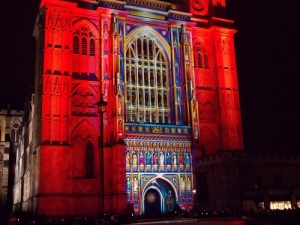 It was at Westminster Abbey that one of the most spectacular installations was taking place. The Light of the Spirit by Patrice Warrener illuminates the West Front of Westminster Abbey in colour and light. The projection highlights the architectural splendour of the building and audiences  witness the statuettes of 20th-century martyrs reimagined. The figures are transformed by the illuminations into the main focal point of the front of the building. 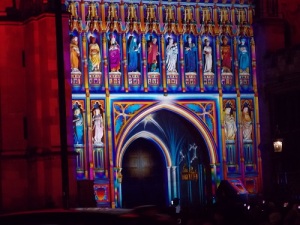 Patrice Warrener is recognised worldwide for his chromolithe projection system. His polychromatic illumination of buildings gives the impression of a spectacularly bright painted surface. He has designed more than 80 creations for locations all over the world. 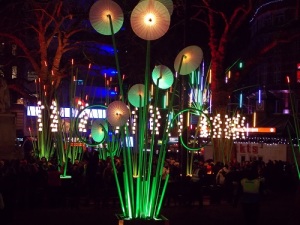 Another popular installation is the Garden of Light by TILT, TILT are a French collective that reclaim public space for their art. They create luminous, dreamlike structures using recycled materials processed to high technical production quality.

Founders François Fouilhé and Jean-Baptiste Laude started the collective to give prominence to light art and to encourage audiences to view it from a new perspective.The crowds were fascinated by the collection of plant sculptures basking under the glow of giant flowers and trees in Leicester Square.

Nearby in Piccadilly, the crowds were entertained by Luminéoles by Porté par le vent, originally created for the Fete des Lumières Lyon, the brightly coloured fish dance gracefully over the street changing colours . Porté par le vent take inspiration from light and the elements for their creations, attempting to transform everyday locations into atmospheric dreamlands. 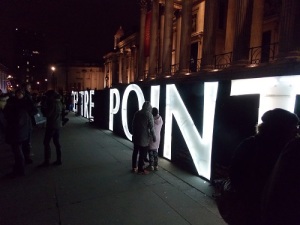 In Trafalgar Square, the Centre Point Lights are not particularly spectacular but offer a little piece of London history. For decades, the three-metre high neon letters at the top of Centre Point have been visible and been a familiar landmark in London.

Also in Trafalgar Square are Plastic Islands by Luzinterruptus, Plastic Islands is inspired by the ‘Eighth Continent’: the ‘Garbage Patch’ of marine litter that accumulates in the North Pacific Ocean. It comments on the alarming rate that rubbish is swallowing large areas of the Pacific Ocean and the lack of action to tackle this problem.

Made from thousands of bottles, this installation provides a message that waste from one part of the world can have consequences on other parts of the globe. Luzinterruptus are an anonymous artistic group, implementing urban interventions in public spaces. Light is an integral part of their work, and is used to draw attention to social, environmental and political issues within cities and other environments.

If you are thinking about attending the last day of the festival on Sunday, it may be worth checking with the organisers whether some of the installations will be switched off due to the large crowds expected.

King’s Cross station is one of Britain’s major railway terminus  with high speed inter-city connections to destinations in Yorkshire, the North East and northern and eastern Scotland. King Cross is tied closely to St Pancras sharing the tube station on the London Underground network.

King’s Cross was built in 1851–1852, the main design was by Lewis Cubitt of the well known Cubitt family which was based on two great arched train sheds, with a brick structure at the end. In contrast to the ornate and decorative St Pancras, King’s Cross station was built to be based on efficient functionality.

The heyday of Kings Cross was between the 1930s and 1960s when it was the terminus of the high speed lines from Scotland and the North.  Some of the most famous steam trains of the time, the Flying Scotsman, Gresley and the record breaking Mallard steamed into King’s Cross.

In 1972, a new frontage containing a passenger area and ticket office was built to the front of the station, although considered to be temporary, it was still there 40 years later. In 2005, a £500 million restoration was planned that would return the original roof to its former glory and restore the Grade I-listed façade of the original station.

A new concourse was built to facilitate movement around the station and a piazza on the front of the original façade.

The opening of the restored Kings Cross and St Pancras are part of a massive regeneration of an area that had a less than attractive reputation in the last 30 years.

As well as its place in railway history , King’s Cross is also known for two very different reasons, one of the oldest legends related to Kings Cross was related to Roman times when the area was supposed to be the scene of a battle between Boudicca’s Iceni tribe and the Roman Army. This has led to the a series of stories that the Ancient Queen is buried under platform 9 and her ghost stalks the station.

A more recent phenomenon related to Kings Cross is the Harry Potter novels by J K Rowling, according to the books Harry and his friends depart from the fictional Platform 9¾ on the Hogwarts Express to go to Hogwarts School.

King’s Cross have entered into the spirit of Harry Potter by creating a fictional Platform 9¾ which has a luggage trolley  impaled within the wall, which is a mecca for  Harry Potter fans for photographs.

Kings Cross perhaps does not have the gothic splendour of nearby St Pancras but is worth a short visit to understand another style of Victorian Railway architecture .