John Lewis has announced plans to mark its 150th anniversary with a series of commemorative events which will celebrate a business that has grown from a humble draper’s shop opened in 1864, to the £4 billion international, award-winning business it is today.
The centrepiece of the celebrations will be an interactive exhibition in the retailer’s flagship shop on Oxford Street
From the cobbled streets of Victorian London, visitors will open a door into the retailer’s past via the draper’s shop where it all began on 2nd May 1864. Following a dimly lit corridor past the original book that includes the first day’s takings, guests will find themselves in John Spedan Lewis’ office, the setting for the birth of the John Lewis Partnership. Visitors will get an insight into the man Spedan was and his revolutionary idea that all workers should be co-owners and share in the success of his company.
After a installation which tells the story of how a WWII bomb threatened the future of the company, the exhibition proceeds to explain how the “craft of shopkeeping” and a passion for customer service has guided the business ever since. The work of many celebrated designers and brands is recognised, as well as the retailer’s own textile mill, Herbert Parkinson, where a bespoke weave will fill the exhibition floor and run over the ceiling. Visitors will exit the exhibition with a glimpse into how we will shop, live and look in the future, through a unique collaboration with the Royal College of Art.
In a first for the retailer, the Oxford Street flagship will also open its roof to London. Working with Tony Woods, Royal Horticultural Society National Young Designer of the Year, and the Partnership’s own gardeners from the Longstock estate, one of the capital’s largest urban rooftops will be transformed into a tranquil space that boasts some of the best views in town.
Across the country John Lewis shops will be joining the celebrations, which start on 3rd May, with a whole host of regional activities and, working in partnership with Barnardos, each shop will be supporting local charity initiatives. 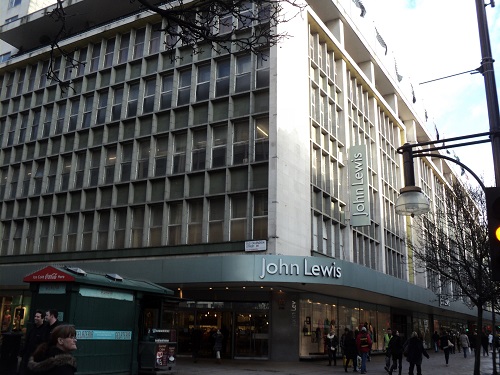 John Lewis is a premier department store in Oxford Street, it was on this site that John Lewis in 1864 opened a small drapers shop. The success of the original store led to Lewis buying another store Peter Jones in Sloane Square in 1905.

The continuing success led to John Lewis’s son Spedan carrying out further expansion by extending the Oxford Street store and acquiring other stores around England under the name of the John Lewis Partnership which was founded in 1920.

The Oxford Street store was badly damaged by a bomb in 1940, but trading continued until the building could be rebuilt.

The partnership has built a reputation for quality goods and service, it also has a good reputation regarding staff offering profit sharing and until  1994, John Lewis stores closed on Mondays to allow staff a full two day “weekend”.

The original Oxford Street shop is still flagship branch of the company. A complete refurbishment of the building was completed in late 2007 at a cost of £60 million.

The John Lewis department store has a wide range of goods in many departments, including electrical goods, tableware and a fabrics and haberdashery section. They also do Men’s and Women’s Fashion, fashion accessories, cosmetics and much more.