A Short Guide to Primrose Hill 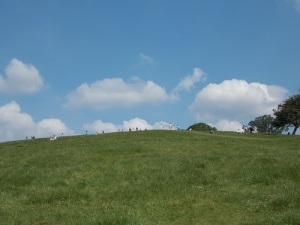 Primrose Hill is a hill of 213 feet (65 m) which is located on the northern side of Regent’s Park, Primrose Hill is also the surrounding neighbourhood. The top of the hill is one of the most popular vantage points in London giving clear views of central London. 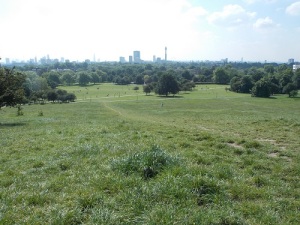 This part of London was part of a large forest and there is evidence that trees populated the hill’s slopes until the fourteenth century. The summit had been cleared long before that and there are suggestions part of the hill was used as a burial mound, this part of Primrose Hill became known as ‘Barrow Hill’ which survived until the 19th century when it was levelled to accommodate a large water reservoir. 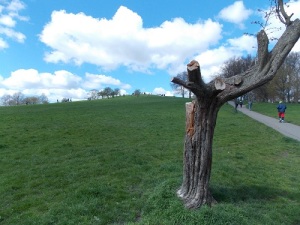 Like many London parks, Primrose Hill was once part of a great chase which was appropriated by Henry VIII and was then owned by Eton College until 1841 when it became Crown property and secured as a public open space. Primrose Hill with its proximity to central London has been a popular landmark for centuries attracting a large number of writers, poets and artists. 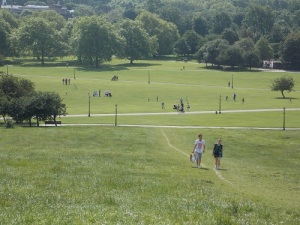 On the summit is a stone with a William Blake inscription, which reads: I have conversed with the spiritual sun. I saw him on Primrose Hill. Watching the sunrise or the sunset from the top of the hill is a popular attraction for a large number of people. The hill has been popular for less savoury pastimes, Duels and prize-fights have taken place and in the 17th century, Sir Edmund Berry Godfrey was found mysteriously murdered on the hill.

From the 19th century, residential development around Primrose Hill has created one of the more fashionable districts in London between the centre and the suburbs. Fortunately this development all around the hill did not to fulfilment of the prophecy of Mother Shipton, England’s most famous prophetess of the 16th century who said that when London shall surround Primrose Hill the streets of the metropolis will run with blood. 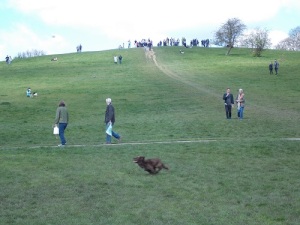 The hill and the area has been a popular place to live for a large number of writers and have featured in a large number of books. It has also been popular with musicians, the Beatles, Madness and Loudon Wainwright III are just a few to be inspired. 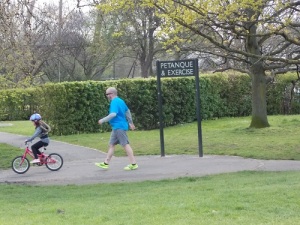 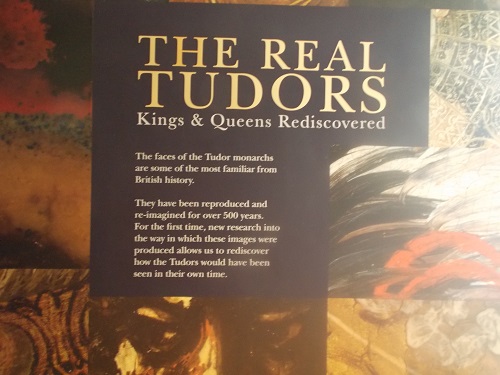 This special display, focusing on the portraiture of the Tudor monarchs,  allows visitors to rediscover these well-known Kings and Queens through the most complete presentation of their images staged to date.

Works from the Gallery’s Collection will be complemented by exciting loans and a prized possession of each monarch, as well as recent research undertaken as part of the Making Art in Tudor Britain project, to help visitors understand how and why such images were made.

The display includes the Gallery’s oldest portrait, that of Henry VII, which will be displayed with a Book of Hours inscribed by the king to his daughter; six portraits of Henry VIII, including a full-length portrait from Petworth House in Sussex, together with his rosary; portraits of Edward VI and a page from his diary in which he reports his father’s death; five portraits of Mary I combined with her Prayer Book loaned from Westminster Cathedral; and several portraits of Elizabeth I displayed alongside her locket ring. The search for a ‘real’ portrait of Lady Jane Grey in the sixteenth century will also be discussed through the display of a commemorative portrait of Jane that dates from the Elizabethan period.

The National Portrait Gallery is world famous for its collection of portraits of various Kings and Queens, however this special display concentrates on the Tudor monarchs. 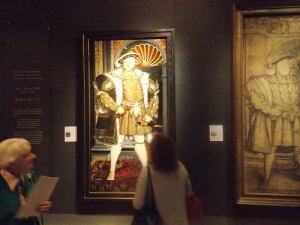 As soon as you walk into the display you come face to face with an enormous portrait of Henry VIII and instantly you feel that you are in the presence of a strong and powerful king, and that of course was the point, portraits were not just a pictorial view of the monarch but were laden with symbols of power. 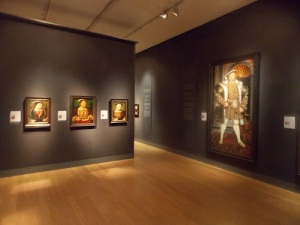 The picture of Henry VIII by Hans Holbein the Younger is the iconic portrait but the other portraits are enlightening, not only for their often strange likeness but how copies were made that were often greatly inferior to the officially sanctioned paintings.

If  the Henry VIII portraits make the biggest initial impact , a smaller portrait of Henry VII has the prestige of being the oldest dating from 1505. 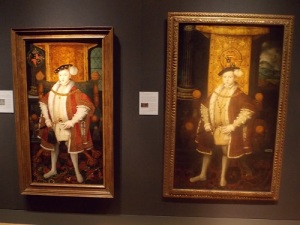 If anyone doubts the power of a portrait , the two portraits of Edward VI illustrates that  the young king copying his illustrious predecessor with his posture and stance. 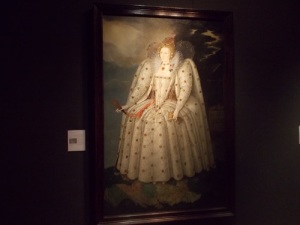 The Queen’ s portraits on display are dominated by Elizabeth  I  especially the iconic portrait painted by Marcus Gheeraerts the Younger.  However a look around the other Elizabeth portraits show that symbols are not just about prestige at home but reflect Britain’s new status as a world power. This power is referenced by insets of naval power and Elizabeth with her hand on a globe. 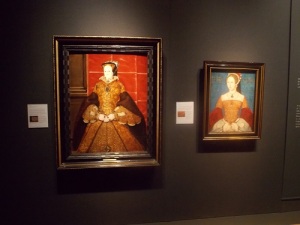 However power often comes at a price and the portraits of Mary I and Lady Jane Grey are reminders that high status can lead to an early end, often by violent means.

This special display would be worth a visit , just for the stunning portraits , however  recent scientific information tells us more about how the portraits were painted and by whom.

Many of the portraits on display are by unknown painters and often this was because the portraits were often a collaborative effort with various people specialising in certain skills. Various scientific techniques are now unpicking some of these mysteries with surprising results. Some have been found with hidden portraits underneath and show considerable repainting in later periods. Various panels give the latest evidence and using the latest technologies The National Portrait Gallery have produced an App to allow the viewer to scratch away the surface of the portrait to see what’s underneath. 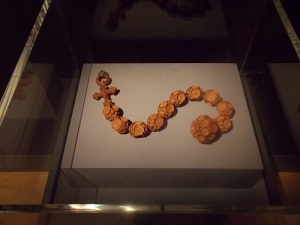 To bring the Tudor Kings and Queens to life , the display have bought together a selection of objects that belonged to the various monarchs. Some of these stunning artefacts gives a real insight into the character of the person, there is a rosary belonging to Henry VIII , a prayer book belonging to Mary I, a small locket ring belonging to Elizabeth I which has a miniature portrait of the Queen inside and another woman possibly Anne Boleyn and perhaps the most intriguing the funeral effigy of Henry VII modelled from the dead king’s face . 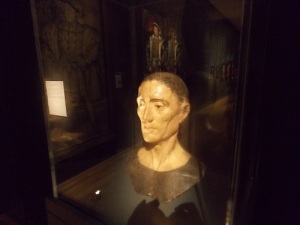 If you are interested in the Tudors or English History, this relatively small but incredibly detailed free display will be a must see.

It brings you face to face with King’s and Queen’s who changed Britain forever, the Tudors understood the importance of establishing your power and prestige, the portraits reflect this and still have the power to impress. 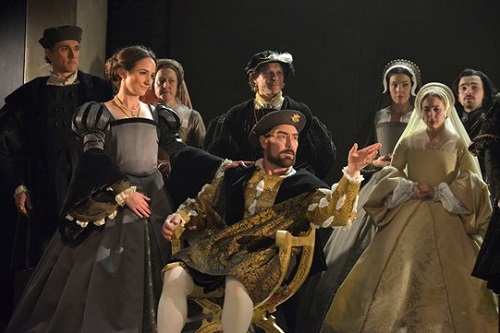 The Royal Shakespeare’s Company with their acclaimed interpretation of Hilary Mantel’s Wolf Hall.

England in 1527. Henry VIII has been King for almost 20 years and is desperate for a male heir. Intent on divorce he demands that Cardinal Wolsey persuade the Pope to grant him an annulment. With every month that passes without progress the King’s anger grows. Into this volatile court enters the commoner Thomas Cromwell.

A one-time mercenary, master-politician, lawyer and doting father, he sets out to grant the King his desire whilst methodically and ruthlessly pursuing his own reforming agenda.

Hilary Mantel is the first author to win two Man Booker Prizes with consecutive novels. They have now been adapted for the stage in two parts by Mike Poulton (for the RSC St Erkenwald, Morte D’Arthur, The Canterbury Tales).

Directed by Royal Court Associate Director Jeremy Herrin. Recent credits include This House (National Theatre) and Much Ado About Nothing (Shakespeare’s Globe).