Review : One More Time by Cornelia Parker at St Pancras Station – May to November 2015

Situated in the stunning Grade 1 listed Barlow Shed, the large DENT clock at St Pancras Station is a familiar sight to millions of travellers. However from today, weary travellers may be confused with two DENT clocks showing the time. The latest edition had been designed by leading British artist and Royal Academician, Cornelia Parker. Cornelia Parker’s work, One More Time, 2015, is a working replica of the station’s DENT London clock, reversed out in black with white hands and numerals and silver detail.

The commission for the work is part of a four year partnership between The Royal Academy of Arts and  HS1 Ltd. (owners of St Pancras International station) to develop Terrace Wires, the station’s commissioning programme for new artwork by leading international artists. This is the first time the Royal Academy of Arts have co-presented an external public sculpture series in London. 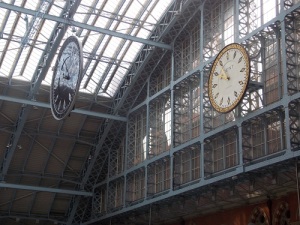 The artwork is made with DENT London Clocks, manufacturers of the present clock at St Pancras and the Great Clock in the Elizabeth Tower, commonly known as Big Ben. Located 16 metres in front of the original clock, the artwork will appear in different positions in relation to where you are in the station. For those travellers alighting from the Eurostar trains the original face will gradually appear eclipsed before gradually reappearing. 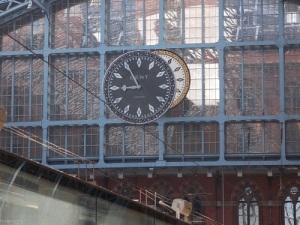 Cornelia Parker RA has conceived One More Time to invoke meditative thoughts on the passage of time and the way that the artwork moves around original clock suggests a slower astronomical time. The artist has used the station as a subject for number of her artworks in the past including Left Luggage, 1989, and a series of eight temporary works made in the St Pancras Hotel for Northern Adventures, curated by Camden Arts Centre in 1992. 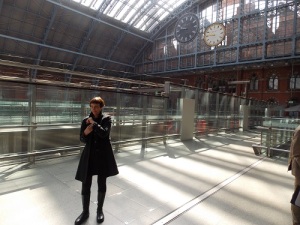 This work by Cornelia Parker follows the recent unveiling of her Magna Carta ( an embroidery ) at the nearby British Library. Her work is on display in many collections, including Tate Gallery, New York’s MoMA and Metropolitan Museum, the Yale Center for British Art, the De Young Museum in San Francisco, the Henry Moore Foundation and the British Council.

St Pancras International is one of London’s great railway stations with up to one million visitors every week, One More Time will offer an intriguing experience for those travellers who cannot resist watching the clock. The artwork will present the illusion that not only are the clock hands   moving but so is the clock itself depending where you are in the station.

One of Cornelia Parker’s  great talents is to take a relatively simple concept and develop it to invent many other interpretations often on the original theme. 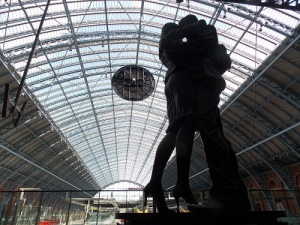 St Pancras has a number of interesting pieces of art and the station itself is well worth a visit, One More Time is a clever and inventive addition to its attractions.

One More Time, 2015 was unveiled at St Pancras International station on  the 28 May 2015 and can be viewed till early November 2015