Exhibition Review – Boilly: Scenes of Parisian Life at the National Gallery from 28 February to 19 May 2019

The National Gallery presents the first-ever exhibition in the UK devoted to Louis-Léopold Boilly (1761–1845) who was considered one of the most important artists of Revolutionary France. The main part of the exhibition is 18 paintings from a British private collection which have never been displayed or published before. The paintings were collected by British property developer Harry Hyams over the course of the last 60 years.

Boilly was born near Lille in 1761 and developed his artistic talent by painting portraits. In 1785 he moved to Paris and built a business selling small portraits of individuals and families within intimate domestic scenes. From 1791, Boilly regularly exhibited portraits and genre scenes at the Paris Salons. However, his private patrons dwindled after the outbreak of the Revolution and he began to painting boudoir scenes that could to be reproduced by printmakers.

These serious charges could have been fatal, but Boilly fortunately escaped imprisonment and began to work on genre paintings for public exhibition. Genre paintings where often considered a rather lowly type of art but Boilly began to use the genre to tell the story of the ever-changing Parisian life. The painting that elevated his reputation was The Meeting of Artists in Isabey’s Studio (1798).

This success led to Boilly at the turn of the 19th century to begin to produce ambitious urban landscapes. In these scenes, Boilly became one of the first French artists to paint views of everyday life on Paris’s streets and boulevards. Boilly’s street scenes can be characterised by their attention to detail with a number of narratives being acted out. 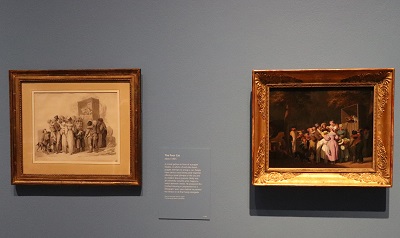 In the painting The Poor Cat (1832) a child picks a pocket while a family of beggars slumps on the pavement. 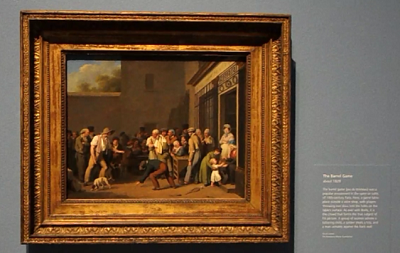 The Barrel Game (about 1828) features a game outside a wine shop with shady goings-on in the background.

In A Carnival Scene (1832) is one of Boilly’s most ambitious street scene with a large number of costumed characters parading through the streets of Paris.

Although his genre paintings were admired, portraiture still played an important role in Boilly’s career, he considered he had produced around 5,000 small portraits in his lifetime. These portraits were a steady source of income and Boilly used to boast he could produce a small portrait in just two hours.

The exhibition includes a number of portraits including Portrait of the Comtesse François de Sainte-Aldegonde (about 1800–5) and Portrait of a Lawyer (first quarter of the 19th century). 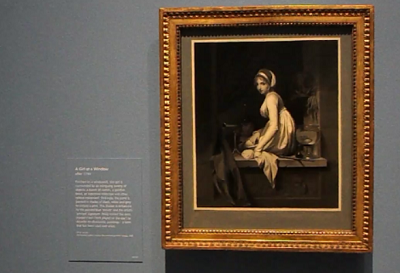 It has been suggested that when he was looking for artificial aids to create faster portraits, he came across the method which he named trompe l’oeil to describe illusionistic paintings that “deceived the eye” by depicting objects in three dimensions. In the National Gallery’s Girl at a Window (after 1799), although it is painted in oil on canvas, it gives the illusion that it is a print in a mount.

This fascinating small free exhibition is the latest of a series of exhibitions at the National Gallery where a certain artist or picture are showcased which allows the viewers to really understand some of the stories behind the artist or picture. Boilly’s artistic production was diverse and prolific because he was always exploring ways to make a living out of his talent. He did not have the connections or perhaps skills to attract rich patrons, therefore he had to find ways to supplement his income. He may have remained relatively obscure except for political events that forced him to change from portraits and slightly risqué pictures to genre pictures that provided a snapshot of Parisian people who were living through the Revolution of 1789, the Terror, the rise and fall of Napoleon, and the restoration of the French monarchy.