Tate Britain presents the first exhibition dedicated to queer British art. The exhibition explores material that relates to lesbian, gay, bisexual, trans and queer (LGBTQ+) identities. The show marks the 50th anniversary of the partial decriminalisation of male homosexuality in England and Wales, It presents work from the abolition of the death penalty for sodomy in 1861 to the passing of the Sexual Offences Act in 1967.

Themes within the exhibition illustrate the ways that artists found a diversity of approaches to present a wide range of sexual desires, experiences and sense of identity. 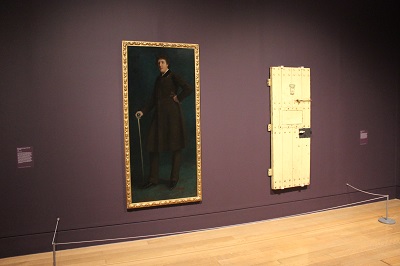 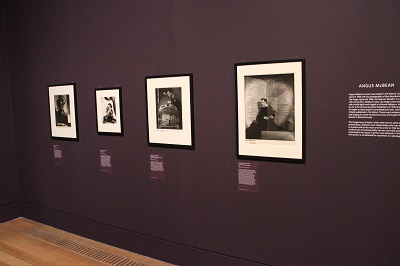 The room entitled Theatrical Types explores one area where gender identities were often intentionally blurred for entertainment. Music hall male and female impersonation acts were very popular and comedy played a part in exploring different identities. Examples on display include photographs of performers such as Beatrix Lehmann, Berto Pasuka and Robert Helpmann by Angus McBean, alongside stage designs by Oliver Messel and Edward Burra. 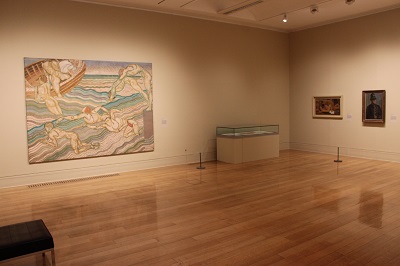 In a similar way to the Pre-Raphaelites, the Bloomsbury set delighted in defying convention and entered into a complex network of relationships. The section on the Bloomsbury set and their contemporaries provides intimate paintings of lovers, scenes of the homes artists shared with their partners and large paintings by Duncan Grant and Ethel Walker. 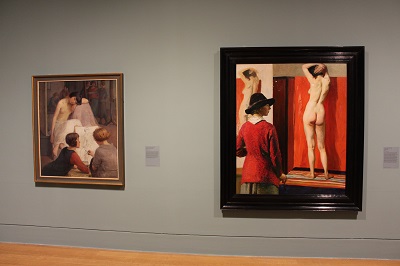 Women in particular began to question their determined role in society and artist’s such as Laura Knight, Vita Sackville- West and Claude Cahun began to produce work that challenged contemporary norms. 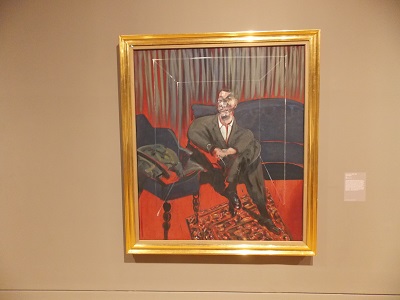 London in particular was a magnet for those who wished to live alternative lifestyles. In the 1950s and 1960s, Soho was considered the centre of ‘queer culture’ and attracted artists such as Francis Bacon, John Craxton and Keith Vaughan. 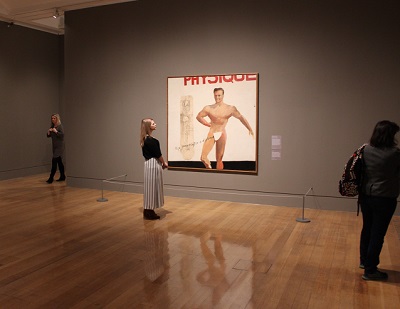 Gradually through the sixties, attitudes began to change which led to the passing of the Sexual Offences Act in 1967 and artists like Bacon and David Hockney began to push the boundaries of what could be depicted in art.

This fascinating exhibition charts the period when the terms ‘gay’, ‘lesbian’, ‘bisexual’ and ‘trans’ had little public recognition. However the restrictive environment did lead to artists finding ways to express taboo subjects or live unconventional lifestyles. But these artists often walked a fine line and many suffered public humiliation and ruined careers for transgressing the perceived social norms. Even as late as the 1960s, Joe Orton and Kenneth Halliwell are sent to jail for the relatively trivial offence of defacing library books.

For more information or to book tickets, visit the Tate Britain website here

Cornelissen’s has been in business since 1855 and supplies Professional artists and amateurs  with pigments, paints, brushes, boards and gilding equipment.

Louis Cornelissen, the founder of the business, is said to have been a Belgian lithographer , setting up in Drury Lane, initially dealing in lithographic colours and supplies, and reputedly moving to Great Queen St in 1855  Cornelissen was first listed as an artists’ colourman in 1881.

Cornelissen provided marked canvases and stretchers for works by many famous artists including  Rex Whistler,  W.R. Sickert was a regular customer as was Aubrey Beardsley.

The family part of the business ended in 1977 at the death of Len Cornelissen, the last in the family, but was reopened in 1979  by Nicholas Walt moving from historical premises in Great Queen St  to shop premises at Great Russell St. 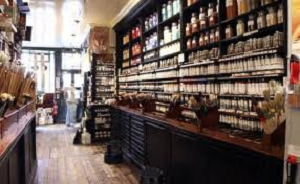 Its shelves are  stacked with bottles of paint pigments  and traditional artist’s materials and tend to have access to supplies not easily available elsewhere.

The friendly and knowledgeable staff offer a wide range of advice on artist and painting equipment that fill the antique shelves.

If you want more information about L Cornelissen and Son , visit their website here