Home » Exhibitions » Faces of a Queen: The Armada Portraits of Elizabeth I Exhibition at the Queen’s House in Greenwich from 13 February 2020 to 31 August 2020

Faces of a Queen: The Armada Portraits of Elizabeth I Exhibition at the Queen’s House in Greenwich from 13 February 2020 to 31 August 2020 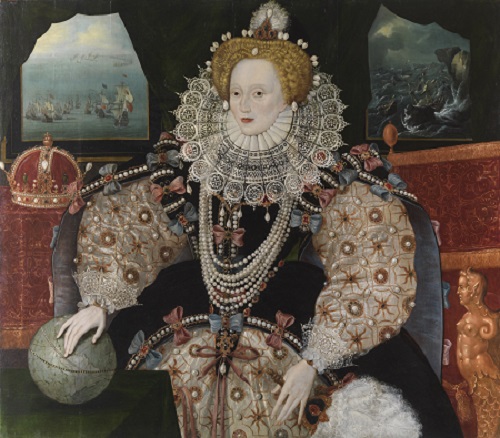 The Armada Portrait of Elizabeth I, circa 1588 © National Maritime Museum, London

Considered to be, one of the most iconic images in British history, the Armada Portraits commemorates the most famous conflict in Elizabeth’s reign when the Spanish Armada failed in their attempt to invade England in 1588. Royal Museums Greenwich showcases its own version of the Armada Portrait alongside the two other surviving versions, from the collections of Woburn Abbey and the National Portrait Gallery.

The Armada Portrait of Queen Elizabeth I. From the Woburn Abbey Collection

All three versions of the Armada Portrait are believed to have been painted shortly after the event, circa 1588. The paintings were once attributed to the Queen’s Sergeant-Painter, George Gower but many experts have suggested that three different artists or studios could be responsible for the three principal Armada Portraits.

This historic exhibition presents an unprecedented opportunity for visitors to come face-to-face with three iconic depictions of Elizabeth I. In all three versions, the Queen is shown in a rich gold-embroidered and jewelled dress, presenting her as a powerful, authoritative and majestic figure with seascapes showing different episodes of the Spanish Armada story. In both the Greenwich and Woburn Abbey versions, Elizabeth I’s right hand is resting on a globe showing the Americas, an imperial covered crown on the table behind, a fan made of ostrich feathers in her left hand, and beside her a chair of state.

The portraits will be united on public display in the Queen’s House, part of Royal Museums Greenwich. The 17th century Palladian villa, designed by Inigo Jones, is situated on the site of the original Greenwich Palace complex, which was a major political centre of the Tudor dynasty and the birthplace of Elizabeth I herself.

Faces of a Queen: The Armada Portraits of Elizabeth I will be open from 13 February – 31 August 2020 at the Queen’s House in Greenwich and is free to visit.

By londonvisitors2014 in Exhibitions on December 5, 2019.
← London Sculptures : Allies by Lawrence Holofcener in New Bond Street A Walk along the Regent’s Canal in London →