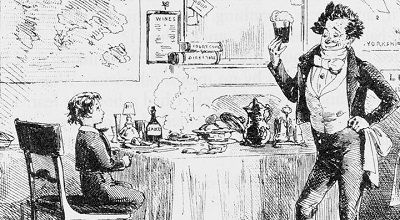 Food is often an important ingredient in Dickens’s stories and a new exhibition entitled Food Glorious Food: Dinner with Dickens investigates Dickens’s relationship with food and the epic menus of dishes and drinks served by the Dickens family to their many guests. It shows his dinner parties full of activity, wit, comedy and people and their peculiarities were essential food for his imagination.

The exhibition also examines the deep-lying reason for Dickens’s need to entertain and share food, his hidden childhood memories of hunger and his belief, made clear in his stories, that rich and poor alike had the right to enjoy food and drink and that children deserved the security of proper meals. 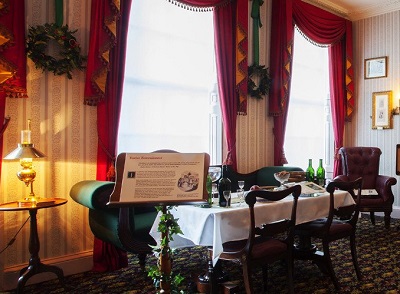 The Food Glorious Food exhibition will be displayed throughout the rooms in which Charles Dickens and his family lived, entertained countless friends and hosted dinner parties for some of the most influential and interesting members of Victorian society.

The exhibition will feature household culinary items used by Dickens and will draw on letters and first hand accounts by Dickens’s dinner guests to build a vivid picture of the experience of enjoying dinner with Dickens.

Among the exhibits is a previously-unseen letter from 1849, written by novelist Elizabeth Gaskell giving a detailed description of a dinner at Dickens’s home.

A groaning Victorian dining table, set for dessert and featuring items used by Dickens and his family when hosting social gatherings at home 

Hand-written dinner invitations from Dickens to his friends

Dickens’s hand-written 1865 inventory of the contents of his wine cellar at Gad’s Hill Place (among the items to be found in Dickens’s cellar in 1865 were ‘one 50 gallon cask ale’, ‘one 18 gallon cask gin’, ‘one 9 gallon cask brandy’ and ‘one 9 gallon cask rum’. The cellar also included dozens of bottles of champagne, Chablis, Sauterne, Metternich hock, claret, L’eau d’or and Kirsch)

An extremely rare early edition of a fascinating cookbook written by Catherine Dickens – wife of Charles – in the early 1850s, entitled What Shall We Have For Dinner? filled with meals and menus (‘bills of fare’) created by Catherine to put before gatherings of between two and twenty people, all aiming to answer the title of the book

Dickens’s heavy silver fish-knife, engraved with a fish design and the monogram ‘CD’

A set of 6 silver punch ladles presented to Dickens to celebrate the completion of Pickwick Papers, each featuring a character from the novel

The exhibition’s guest co-curator is Pen Vogler, author of Dinner with Dickens: Recipes inspired by the life and work of Charles Dickens, published by CICO books. The book celebrates Victorian food and recreates the dishes which Dickens wrote about and served.