Home » Exhibitions » Exhibition Review – Venom : Killer and Cure at the National History Museum from 10th November 2017 to 13th May 2018

Exhibition Review – Venom : Killer and Cure at the National History Museum from 10th November 2017 to 13th May 2018 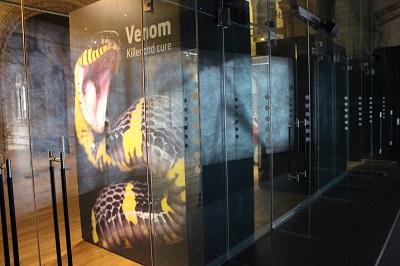 The Natural History Museum present an exhibition that explores the worlds of venomous creatures in a new exhibition entitled Venom : Killer and Cure. The exhibition has 250 specimens  on display, with multimedia films showing some of the creatures in action. 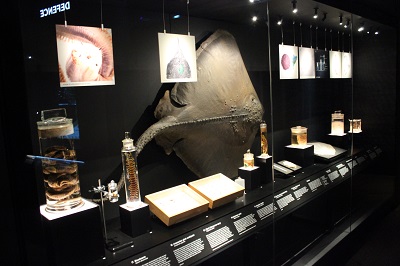 In the evolution of various species, they have developed the ability to create venom. Most of the venom targets the prey’s physiology, such as the muscles and the nervous system. 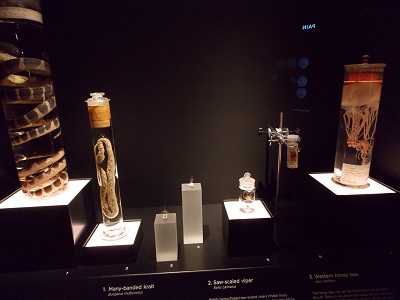 The exhibition also reminds visitors that venom and poison are two distinct natural weapons because of how they may enter the body of the victim. The hallmark of venom is that it’s introduced via a wound. It can be injected through a number of means, including teeth, a sting, spines or claws. Poison is different as there is no wound involved. It can be absorbed into the bloodstream through the skin, inhaled or ingested. Some species are both venomous and poisonous such as the spitting cobra and the blue-ringed octopus. 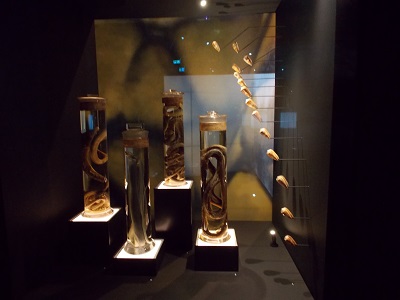 Around the exhibition are creatures that have developed their own particular venom to gain advantage in the natural world. There are many kinds of specimens, from snakes, centipedes, snails and scorpions to various insects. 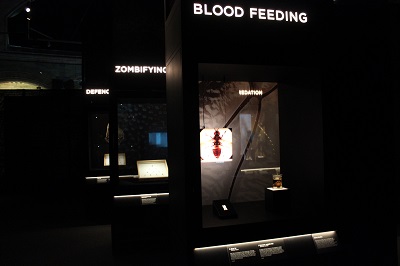 Venom plays a vital role in species whether they are predator and prey and often develop unusual ways of dealing with the effects of venom. Meerkats are so frequently at risk from venom and poison from their prey that they have developed a total resistance to them. 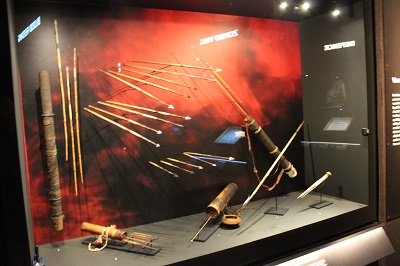 Human beings have used venom for both as a hunting aid by putting venom on arrows and within science constantly investigating some of nature’s deadliest venoms to save lives. 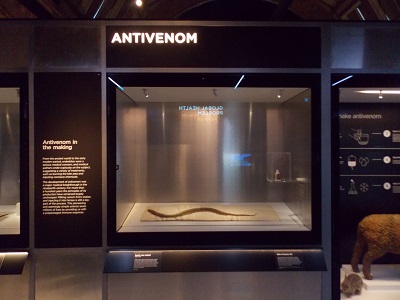 Towards the end of the exhibition is a short film about Steve Ludwin, whose unconventional experiences injecting venom have led to developments in pioneering the world’s first human derived anti-venom.

Finally a 2.5 metre Komodo dragon specimen displayed in spirit allowing visitors to get up close to one of the most venomous land animal on the planet. 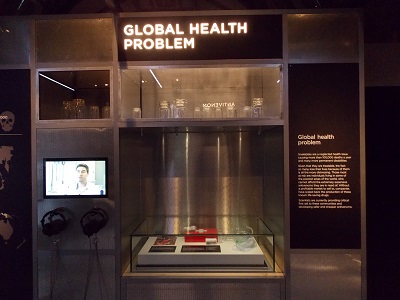 This fascinating and unusual exhibition allows visitors to understand the many diverse uses of venom in the natural world. Used both for attack and defence, venom plays a vital part in a number of species to enable their survival. The exhibition includes a number of interesting  effects to remind us that we are not immune to attack from various creatures and that venom has enabled scientists to provide anti venom solutions and develop lifesaving drugs.