To mark the centenary of the October Revolution, Tate Modern presents Red Star Over Russia: A Revolution in Visual Culture 1905–55. The exhibition is drawn from the collection of the late graphic designer David King and offers a unique visual history of Russia and the Soviet Union. 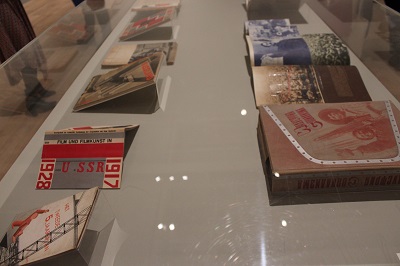 David King assembled one of the most comprehensive collections of Russian and Soviet material in the world with over a quarter of a million artefacts. The exhibition features over 250 posters, paintings, photographs, books and ephemera, many on public display for the first time including works by El Lissitzky, Aleksandr Rodchenko and Nina Vatolina.

From the overthrow of the last Tsar, the social transformations inspired a wave of innovation in art and graphic design across the country. This innovation was the creation of a popular new art in the form of posters, periodicals, leaflets and banners. With a sizeable section of early Soviet Society unable to read, the Bolsheviks used art to create the idea of a brave new world. Monumental sculptures and propaganda posters were displayed on public squares, factories and inside people’s homes.

The exhibition features examples of posters by artists such as Adolf Strakhov, Valentina Kulagina and Dmitrii Moor, whose depictions of heroic acts and industrial scenes illustrated the role of the working class was to create a new world after deposing of the last vestiges of the old Tsarist world. 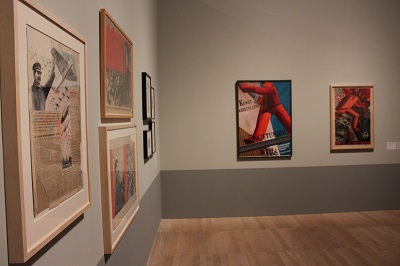 It was not just in the Soviet Union that the message was disseminated, the exhibition features work by Aleksandra Deineka based on a giant mural centrepiece of the USSR Pavilion at the 1937 ‘Exposition Internationale des Arts et Techniques’ in Paris.

The international image of the Soviet Union achievements in art and culture is contrasted with a section of the exhibition which is dedicated to the memory of the millions who perished in Stalin’s purges. Photographs of ordinary people are interspersed with more well-known figures like Lev Kamenev, Grigorii Zinoviev and poster artist Gustav Klutsis who was executed in 1938. 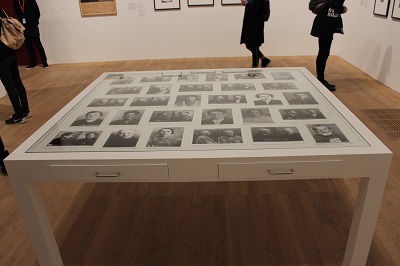 The fall from grace of major figures is illustrated by some rare footage of Leon Trotsky, one of the leaders of the revolution, he was exiled and eventually murdered.

After the German invasion in 1941, the Soviet Union was mobilised into action. The patriotic posters called on all of the population to make a contribution, Nina Vatolina’’s posters called on the women of the country to come forward and play their part.

There have been a number of exhibitions recently about the Russian Revolution but this fascinating exhibition clearly illustrates the difference between the idealised picture of the Soviet Union and the often grim realities of the system. The posters are a call to arms to create a new world and artists played their part in creating images that would inspire the population. Art was also used for propaganda abroad, the work for the 1937 Paris exposition was a part of a campaign to spread the revolution to other nations. The Soviet Union was not alone in using art for propaganda but it was innovative in the use of posters, leaflets and banners to get its message across.