Tours and Talks at Historic Royal Palaces – January to March 2017 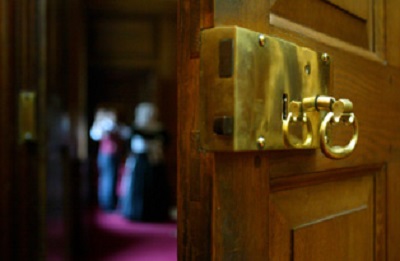 Historic Royal Palaces offer a series of events between January and March, including The People’s Revolt, Ghost Tours and Twilight Tours.

Infiltrate the Tower of London after hours – The People’s Revolt is an immersive, interactive experience from ground-breaking theatre company differencEngine in collaboration with Historic Royal Palaces. Experience what it’s like to be at the centre of a present day ‘Peasants’ Revolt’.  Live the build-up through digital storytelling then blur the lines between history and reality as you storm the Tower and decide the fate of the nation.

Visit the spot where two bodies were discovered in shallow graves in the 1870s, hear the tale of the Tudor royal nurse whose spirit is said to stalk her former apartments, and decide for yourself the origin of the mysterious figure caught on CCTV in the palace in the dead of night as you experience the unique atmosphere of Hampton Court after dark…if you dare.

The Tower’s Yeoman Warders give an exclusive twilight tour of the Tower. Take in world famous sights such as Traitor’s Gate, the scaffold site and the Bloody Tower, and be appalled and amazed by tales of prisoners and past residents.

When all the gates are locked and the lights are out, is the palace truly asleep? Explore the weird and wonderful world of Victorian spiritualism and the 19th century obsession with life after death. Be guided through the shadowy state apartments to relive the sorrow of heartbroken Kings and frustrated future Queens.

He’s behind you! This lecture gives an insight into the world of Victorian pantomime, music hall, theatre and performance. Find out more about cross-dressing actors and backstage shenanigans in an era that brought entertainment to the masses. Hear from Kate Howard, historian and Creative Director for the UK’s oldest professional costumed historical interpretation company, Past Pleasures Ltd.

The Jewish community has played an important part in the City of London ever since their arrival with William the Conqueror in 1066, but it has not always been easy or straightforward. The tumultuous relationship with the crown has ranged from Jews being valued as advisors to vilified as criminals. Listen in on the panel as they explore the part the Tower played in Jewish history and the important role the Jewish community continues to play in London today.

Back for the second year, Banqueting House will host a for a pub quiz with a difference. Sit under the beautiful ceiling painted by Sir Peter Paul Rubens and test your knowledge on current affairs, sport, art, food and film There will be a few rounds for the history lovers but plenty of other subjects as well, so pick your team wisely for this fun, fast-paced quiz, with prizes, drinks and some surprises!

Tower of Love: Romance is Dead

13 February, 18.30-21.00An anti-Valentines sketching special, dedicated to those who died at the Tower in the name of love. Enter the drama and tragedy of the Tudor court, and explore Henry VIII’s doomed love affair with Anne Boleyn.  Sketch our costumed models, posing as their ghosts at the site of her burial in the Chapel of St Peter ad Vincula. Plus create miniature love tokens with guest artist Lozzy Bones, in the Chapel’s crypt.