Exhibition Review : Beyond Caravaggio at the National Gallery – 12th October 2016 to 15th January 2017

The National Gallery present a major exhibition entitled Beyond Caravaggio which will explore  the work of Caravaggio and his influence on the art of his contemporaries and followers.The exhibition brings together a number of works from around the British Isles. The majority of the 49 paintings in the exhibition come from museums, stately homes, castles, churches and private collections across Great Britain and Ireland. Many of the paintings are little known to the wider public but will demonstrate how Caravaggio’s art came to inspire many generations of painters.

Michelangelo Merisi da Caravaggio (1571–1610) is considered one of the most interesting figures in art, not only for his original, natural and dramatic paintings but also for his often violent lifestyle. His rise to fame was rapid when his first public commissions, the Martyrdom of Saint Matthew and Calling of Saint Matthew were considered a great success.One of Caravaggio’s great innovations was a naturalism combined with a dramatic use of light and dark to create almost a theatrical effect.

Beyond Caravaggio begins by exploring Caravaggio’s early years in Rome, where he produced works depicting characters from the streets including musicians, cardsharps and fortune tellers. The National Gallery’s own Boy Bitten by a Lizard  illustrates that Caravaggio was perfecting his skills before his first public commission. Also hanging in the first room is works inspired by the artist including Cecco del Caravaggio’s A Musician, Bartolomeo Manfredi’s Fortune Teller and The Cheat with the Ace of Clubs by Georges de la Tour. 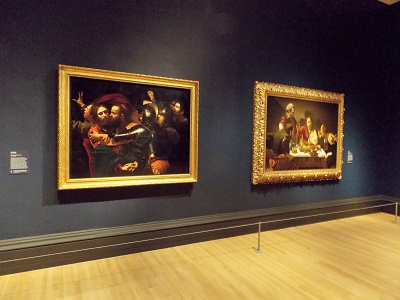 The unveiling of Caravaggio’s first public commissions in 1600 led to numerous commissions from distinguished patrons, among them Ciriaco Mattei for whom Caravaggio painted The Supper at Emmaus and the recently rediscovered The Taking of Christ. These two paintings will be reunited with other works formerly in the Mattei collection: – Giovanni Serodine’s Tribute Money and Antiveduto Gramatica’s Christ Disputing with the Doctors.

Caravaggio’s style of painting from life and his use of strongly contrasted lighting effects become very popular with a number of other artists at the time who began to develop their own variations. In the exhibition Giovanni Baglione’s Ecstasy of Saint Francis is considered the first truly Caravaggesque painting by another artist. Orazio Gentileschi, who was a friend of Caravaggio’s, is represented by two works and his daughter, Artemisia, is also represented with Susannah and the Elders.

Caravaggio may have been one of the most famous painters in Rome, however his violent and quarrelsome behaviour led him to flee to Naples after he was accused of murder. The Kingdom of Naples was then part of the Spanish Empire and Caraveggio began to influence  many Spanish artists, like Jusepe de Ribera who is represented by three works in the exhibition including The Martyrdom of Saint Bartholomew. Whilst on the run, Caravaggio was attacked and severely injured in 1609 before he died a year later under somewhat mysterious circumstances in Tuscany.

The artist may have died, however his influence was spreading throughout Europe most notably by a group of artists from Utrecht who had travelled to Rome as students in the first years of the 17th century. In the 1620s painters like Hendrick ter Brugghen, Gerrit van Honthorst and Dirck van Baburen created works in the style of the master which are featured in the exhibition.

Remarkably Caravaggio’s style whilst influential was rejected in middle of the 17th century for a more classical painting tradition. It was not until the 20th century that Caravaggio’s reputation began to be restored and for his artistic legacy to be fully recognised.

This intriguing exhibition provides plenty of evidence that Caravaggio was not only one of the most interesting artists of the early 17th century but also left a legacy that has been generally overlooked. Whilst his immediate followers are not perhaps household names, in the following generations artists such as Rubens, Vermeer, Rembrandt, and Velázquez all acknowledged Caravaggio’s influence. After London, Beyond Caravaggio will travel to the National Gallery of Ireland (11 February – 14 May 2017) and the Royal Scottish Academy (17 June – 24 September 2017).

For more information or to book tickets, visit the National Gallery website here

By londonvisitors2014 in Exhibitions on October 11, 2016.
← Review – Wonderlab: The Statoil Gallery at the Science Museum from 12th October 2016 Exhibition Review – The Vulgar : Fashion Redefined at the Barbican from 13th October 2016 to 5th February 2017 →