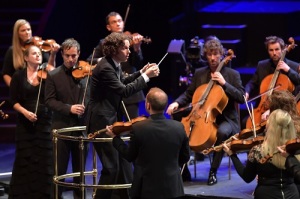 Prom 21 marked the return of the popular Aurora Orchestra on the stage at the  Royal Albert Hall. Since its creation in 2005, the  orchestra has rapidly established itself as one of the most respected chamber orchestras in Europe.  Under the artistic direction of the charismatic Principal Conductor Nicholas Collon, the Aurora Orchestra has gained a considerable reputation for its live performances  and their creative and innovative approach to programming and presentation.

To provide some narrative and insight in the programme, journalist, BBC 3 presenter and author Tom Service provided some of the links between the pieces.

The Prom began with a performance of Wolfgang Rihm’s Gejagte Form (revised version, 2002), Rihm is a prolific German composer who made his name in the 1970s for his expressive music. He regularly returns to compositions and revises them and Gejagte Form was originally completed in 1996 to be revised in 2002. Gejagte Form means ‘hunted form’ and the pieces starts with two violins that begin a driving energy that gradually incorporates other instruments. The different patterns race along in search of some sort of structure when all of a sudden the pace slows and a more confident pattern emerges which brings the instruments together for a grand finale. 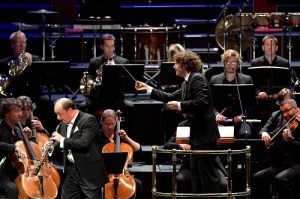 Before the next piece, Tom Service welcomed the soloist François Leleux on stage to discuss Strauss’s Oboe Concerto. At the end of the Second World War, Strauss lived in the South of Germany which was part of the American occupation zone. A chance meeting between the Strauss and an American soldier, John de Lancie who in civilian life had been principal oboist in the Pittsburgh Symphony Orchestra led to the ageing composer to create his Oboe Concerto. François Leleux is considered one of the great oboists of his generation and his performance in front of a captivated Proms audience provided evidence of his remarkable talent. Leleux flourishes his oboe like a wand as he conjures up the various shades of colour in the concerto. The piece has little darkness although at the time Strauss was lamenting the fall of German culture. In many ways it looks to happier times with nostalgic references to the past. Leleux harnesses the lyrical and flowing melodies to interweave with the orchestra to pay homage to a wistful and inventive piece that ends with a joyful expression of hope.

After the interval was a short introduction into the final piece, Mozart’s Symphony No. 41 in C major K551 ‘Jupiter’ by Tom Service, Nicholas Collon and some of the members of the Aurora Orchestra.

Whilst explaining some of the intricacies of the celebrated final movement of the symphony, Nicholas Collon used the audience to demonstrate the way that Mozart used different themes at the same time to create a complex web of music.

One of the trademarks of the Aurora Orchestra is that they will often play long pieces of music from memory and they used this approach with Mozart’s Symphony No. 41 in C major. With few seats and no sheet music on the stage in evidence, a large number of the ensemble stood up around the conductor throughout the performance. It is surprising how these type of changes alter the dynamic of watching an orchestra, the movement of the various sections seemed to add to the energy of the piece and in some ways makes the conductor’s role more important to contain and control that energy.

This was made all the more difficult by the way that Mozart’s music combines like few others to create different patterns and themes, however Nicholas Collon managed to forge a passage thorough the various movements to unveil the complexities of the piece to an appreciative audience. The last movement in particular is when Mozart goes into overdrive and themes and ideas explode like fireworks. The energy of the music was matched by the energy of the orchestra as they successfully completed their own test of memory with assistance of the assured conductor. The enthusiastic response of the Proms audience was an indication that the Aurora Orchestra’s ability to mix the old and the new is a winning combination that greatly enhances their considerable reputation.

The Proms are considered one of the greatest music festivals. Some of the best musicians and orchestras in the world with an incredible diversity of music provide wonderful entertainment with tickets at very reasonable levels.

Even though the seats for many of the Proms have sold out, it is still possible to attend if you don’t mind standing in the arena or the gallery. With a large number of tickets available for every Prom at the price of £6, it is one of the bargains of the summer.