In celebration of the company’s 70th anniversary and to mark the centenary of the Battle of the Somme, Welsh National Opera presents a new opera In Parenthesis at the Royal Opera House. The music for the opera is by acclaimed British composer Iain Bell and the libretto by David Antrobus and Emma Jenkins was based on Welsh poet David Jones’ epic poem.

The publication of In Parenthesis in 1937 with its allusions to the history of Welsh and English literature provided Jones with considerable critical acclaim and was admired by writers such as W. B. Yeats and T. S. Eliot. The epic poem was inspired by Jones’s own experiences as an infantryman during World War I.

The opera begins with two bards representing Britannia ( Peter Coleman-Wright ) and Germania ( Alexandra Deshorties ) and the Chorus of Remembrance who lament about ‘the many men so beautiful’ who went to war.

The stage then becomes a parade ground where the bumbling Private John Ball ( Andrew Bidlack ) joins the rest of platoon of Royal Welch Fusiliers on parade. We are introduced to Sergeant Snell ( Mark Le Brocq), Lieutenant Jenkins ( George Humphreys ) , Lance Corporal Lewis ( Marcus Farnsworth) and a number of other soldiers who undergo drill training before they march to Southampton docks before embarkation to France. Whilst getting on board the ship, Ball gets fearful and has visions of entering the underworld. The darkness of the set, the black clouds above the ship and the music give a deep sense of a dark foreboding. 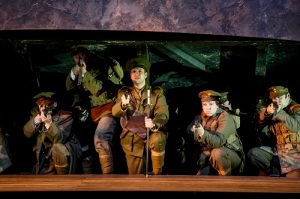 The darkness lightens when the platoon arrives in France where the soldiers enjoy the peace of the countryside until an exploding shell reminds them of their mission and with some trepidation they make their way to the front line. Private Ball’s visions persist as the silhouettes of the soldiers marching suggest an unreal aspect to the whole enterprise. The singing of a carol by a German soldier on Christmas morning lightens the spirit as the platoon respond before bombastic Dai Greatcoat ( Donald Maxwell ) and the Marne Sergeant ( Graham Clark ) have a good natured argument about who has been in more battles both real and mythical. It is suggested that this is just one more battle in an endless cycle and ‘ old soldiers never die, but just fade away’. 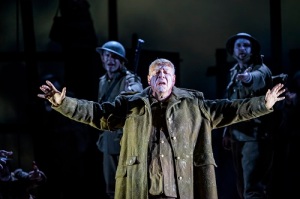 The mythical aspect of the piece is sustained from the beginning with the continuing appearance of the bards of Britannia and Germania and the Chorus of Remembrance bearing witness to the action and providing a commentary like a Greek Chorus in a Greek Drama.

The second half of the opera begins with soldiers enjoying drinks in a French Cafe before singing a marching song as they make their way to the ‘Magnetic South’. When they finally arrive at Mametz Wood, the platoon rests before the final assault on German positions. At dawn, a Chorus of Dryads like Sirens are beckoning the men to their ultimate destruction and one by one the soldiers are killed. Only Private Ball survives, although he is shot in the leg, he crawls out of the wood leaving his rifle behind.

In the final section, the destruction of the scene is replaced by a large green tree and the Queen of the Woods and her Dryads place garlands around the necks of the dead men suggesting that even from the worst of situations there can regeneration and rebirth.

In Parenthesis goes beyond the formulaic picture of the First World War to introduce mythical elements that explores wider questions of life and death and the human experience. Composer Iain Bell and Librettists David Antrobus and Emma Jenkins draw on the poem’s powerful message by creating an opera that interweaves the many different aspects to create a dramatic and intense  coherent whole.

The imaginative design of the set by Robert Innes Hopkins and atmospheric lighting by Malcolm Rippeth provided the light and dark for the drama to flourish and Director David Pountney allowed the piece to develop at a pace where the intensity gradually builds towards the inevitable climax. Conductor Carlo Rizzi responded to this pace and confidently led the orchestra through a number of often complex passages of music.

In such an excellent cast it is difficult to pick out individuals, however Andrew Bidlack’s sensitive portrayal of Private John Ball was convincing as a man enduring nightmares in fantasy and in reality.  Contrasting against the inner turmoil of one man was the introduction of the Chorus as actors and singers which brings a greater scale and a collective force to the opera, the male Chorus enthusiastically sing the marches and hymns whilst the female part of the Chorus provide the otherworldly soundscape for many of Ball’s visions.

This fascinating and thought provoking opera brings David Jones’ epic poem to life giving voice to someone who went through the living hell of World War 1 and survived to ask the question ‘ what’s the meaning of this ?’ It is a question that many of the events that mark the centenary of World War I ask, it seems a century later we still have few answers when we consider the pointless massacre of millions of people.