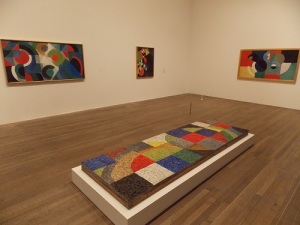 Tate Modern presents the first UK retrospective of  Sonia Delaunay  who was a key figure in the Parisian avant-garde and whose work spanned painting, fashion and design. The exhibition covers  her considerable artistic career, from her early figurative painting in the 1900s to her  abstract work in the 1960s. This exhibition offers a radical reassessment of Delaunay’s importance as an artist, showcasing her originality and creativity across the twentieth century.

Much of her early life is shrouded in mystery but  it  believed she was born in Odessa and then moved to St Petersburg at an early age. Showing an early interest in art,  when she reached the age of 18, she was sent to be trained in an art school in Germany .  Eventually Sonia Delaunay (née Stern, then Terk) came to Paris in 1906 to join the emerging avant-garde. The early pieces in the exhibition illustrate how Delaunay was strongly influenced by the art she was viewing in Paris especially  the post-impressionist work of Van Gogh, Gauguin and Henri Rousseau.

When she  met and married the artist Robert Delaunay in 1910, she was influenced by his work which was more abstract and  concerned with colour rather than just form. Robert Delaunay had been studying the colour theories of Michel Eugène Chevreul and  gradually both Robert and Sonia began to develop their own theory called   ‘Simultanism’  which involved creating  abstract compositions of dynamic contrasting colours and shapes.

Paris in the early 20th century was remarkable for its energy and vitality and the creations of Sonia including Electric Prisms seemed to encapsulate the spirit of the age.  However this vitality was cut short by the First World War, Sonia and Robert were on holiday in Northern Spain when hostilities began and they decided to remain in Spain and Portugal. It was in this period that the allowances that Sonia received from her guardians in Russia stopped which led to considerable financial problems. 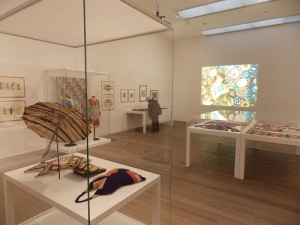 Sonia had always been interested in fashion and design and began to develop these interests as an alternative income. She eventually open a fashion and design shop in Madrid which was a great success , there were also commissions for designing covers for Vogue magazine and costumes for Diaghilev and the Ballet Russes.

When the Delaunay’s returned to Paris in 1921, Sonia’s designs were in great demand and in 1925, she set up her own fashion house and registered Simultane as a brand name in France and the United States.

The economic crash of 1929 caused the business to close but she would still undertake commissions for a number of clients.

One of their largest projects in the 1930s was for the 1937  Paris exhibition of Arts and Technology in Modern Life. Working as a part of a collective, they designed two of the exhibition buildings.  Three of the murals for Palace of the Air are shown in the Tate exhibition. 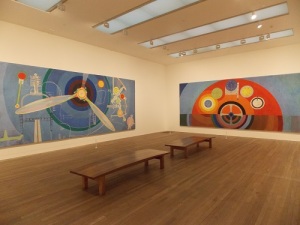 After Robert’s death in 1941, Sonia developed her geometric shapes in a number of materials including tapestries, stained glass and mosaics.  She constantly applied her designs to different formats  illustrating poetry books and designing tapestries for the prestigious Gobelin and Pinton workshops.

When she died in Paris in 1979 aged 94, she was recognised for her considerable talents  and became  an inspiring figure for the new generation of artists.

This comprehensive exhibition offers an opportunity  to consider Delaunay’s importance as an artist in a number of mediums throughout the twentieth century.  Her creative and original use of geometric abstract forms offers an exhibition of great variety dazzling with colour and vitality. For all her talents as an artist, the exhibition also pays homage to her business sense to create a brand that allowed her a great deal of experimentation in a wide range of areas.

Sonia Delaunay  is  perhaps not widely known but this exhibition will offer a chance to gain knowledge of one the most versatile and creative female artists of the twentieth century.