Home » Exhibitions » Exhibition Review : Sargent , Portraits of Artists and Friends at the National Portrait Gallery – 12th Feb to 25 May 2015

Exhibition Review : Sargent , Portraits of Artists and Friends at the National Portrait Gallery – 12th Feb to 25 May 2015 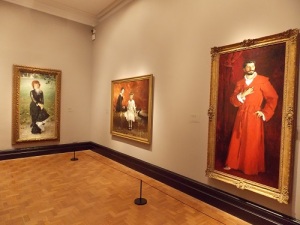 John Singer Sargent (1856-1925) was considered one of the greatest portrait painters of his generation. Widely acclaimed in his time,  he  had a wide range of acquaintances including some of the leading artists, writers, actors and musicians of the time. He was a prolific painter whose formal portraits, commissioned by wealthy patrons often contrasted with the more intimate and experimental portraits of his friends and contemporaries which included Auguste Rodin, Claude Monet and Robert Louis Stevenson. 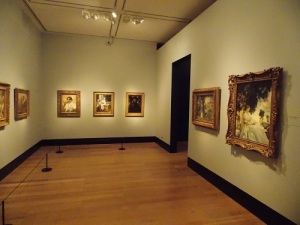 This major exhibition of over seventy portraits spans Sargent’s time in London, Paris, Boston and New York as well as his travels in the Italian and English countryside. Important loans from galleries and private collections in Europe and America make this an opportunity to discover the artist’s most daring, personal and distinctive portraits.

Although Sargent’s parents were American, he was bought up and spent his formative years travelling around Europe, when he decided to study painting, he was accepted by the prestigious École des Beaux Arts in 1874 and developed his skills under the teaching of Carolus-Duran who was a respected French portraitist. There is a portrait of  Carolus-Duran by Sargent in the exhibition. 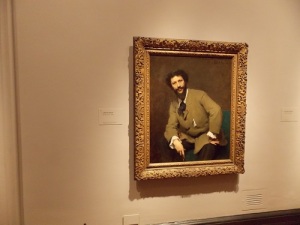 Sargent was soon accepted into the Paris art world and became friendly with a number of French artists and fellow expatriates including Monet and Rodin. His early works led people to believe he was at the start of a glittering career, however his portrait of Madame X (Madame Pierre Gautreau) caused a scandal at the Paris Salon of 1884. 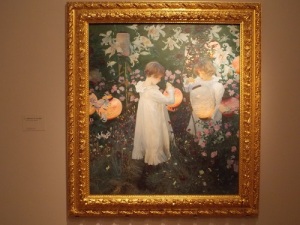 The scandal was such that Sargeant decided to move to London for a while and spent a great deal of time in the next two years travelling between the London and Paris.
In one of his forays to England he travelled and stayed in  the Anglo-American colony of artists and writers in the Cotswold village of Broadway. It was at this time that he painted the widely acclaimed Carnation, Lily, Lily, Rose. In the same period he travelled  to Bournemouth  and painted a portrait of writer Robert Louis Stevenson. The exhibition shows  two of Sargent’s striking portraits of Stevenson in which he captures the tall languid writer in a couple of informal poses. 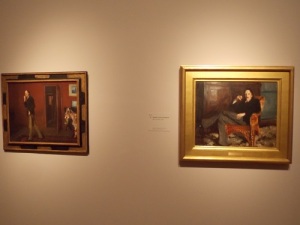 Although spending most of his life in Europe, Sargent never gave up his American citizenship and from the 1890s, he built up a considerable reputation and was in demand  for portraits . It was in 1890 that Sargent painted the flamboyant Spanish dancer Carmencita, who had entranced New York audiences with her flamenco dancing. 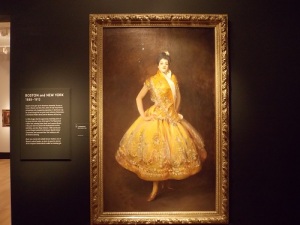 When Sargent was back  in England he immersed himself  in the cultural life of London, and became a  friend to many artists, writers and musicians.  A talented musician himself, he promoted the careers of many musicians, among them the French composer Gabriel Faure. 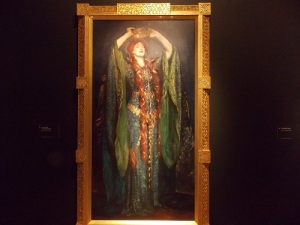 His striking  portrait of Ellen Terry as Lady Macbeth in full theatrical pose was an illustration of his interest in the theatrical profession . 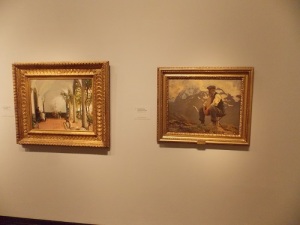 After 1900, Sargent cut back considerable on his portrait commissions and  turned to landscape painting, travelling to the Alps, Venice and southern Europe.  He often travelled with fellow artists and often painted them as  they painted the natural world around them.

This major exhibition charts the career of  John Singer Sargent  and  illustrates the differences between his more formal portraits and the more experimental portraits of artists and friends.

Even his detractors could not deny Sargent’s technical brilliance, but suggested  his more formal portraits lacked insight into the sitters character. By contrast his less formal portraits often sparkled with colour and vitality.  These two sides of Sargent’s career is one of the main themes of the exhibition and provides some reasons why in the first part of the 20th century he seemed to fall out of favour being considered old fashioned.

He also seemed to suffer because he did not seem to belong into any particular school , for the English critics some of his painting were impressionistic, whilst the French critics considered him, not impressionistic enough.

The exhibition shows that these concerns blinded people to the fact that his paintings covered a wide range of styles and subject matter.  Since the 1960s, there has been a resurgence of interest in Sargent and his talent as a portrait painter  fully recognised. The exhibition offers visitors the chance to see some of his major works and understand his important friendships and relationships with some of the major writers, artists and musicians of his time.

By londonvisitors2014 in Exhibitions on February 11, 2015.
← Review : Madame Tussauds London Exhibition Review : Magnificent Obsessions, The Artist as Collector at the Barbican – 12 Feb to 25 May 2015 →