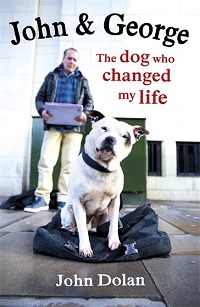 John and George is the true story of John Dolan and his dog George, both overcome considerable difficulties to achieve a measure of success and fame.

It was in 2009 when John acquires George through a pair of friends who had bought him off a drunken Scotsman. John rather reluctantly takes on the responsibility of looking after George feeling that it is a struggle to look after himself with his financial and drug problems. However the responsibility of looking after George leads John to start looking at his life and where it had all gone wrong.

John was bought up in a council flat in North London, his father was a dustman who was also a talented artist, a skill that John inherits. His mother was a cleaner who also took the main responsibility of bringing up the five children in the family.

However from a relatively early age, John  gets in trouble both with his parents and the authorities. Starting school did little  to help him with constant bullying from other children.

When John was around eleven ,  his father drops the bombshell that he was not actually their child but he had been adopted, to make matters worse it turned out that one of his “sisters” was actually his mother.

John’s problems escalated from this point, glue sniffing and truancy was followed by soft drugs and stealing until almost  inevitably at 18 he was sent to a young offenders institution on deception charges.

The next few years for John is a cycle of crime, prison and hard drugs leading to an estrangement from his family and no permanent place to live. 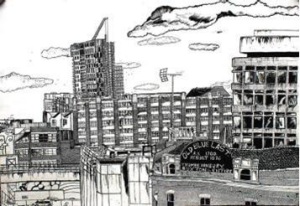 After a few months, John and George become well known figures on Shoreditch High Street and John decides to start drawing George and selling his portraits  to people passing by. John’s drawings also begin to be noticed by others especially those who are part of the Shoreditch Art Community. 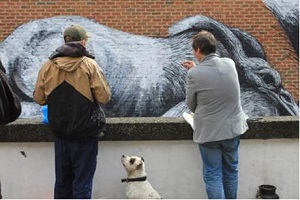 In 2012 John is approached by a local dealer who represents a number of street artists who introduces him to some of the artists.  John’s collaborations with a series of high-profile street artists lead to an offer for his first gallery show and critical recognition.

John and George is an unusual book in many ways , on the surface it could be seen as purely rags to riches success story or someone who has found redemption though his talent.

But the book is actually far more complex than that, John’s background did not automatically lead to the type of life that ensued. What happened for whatever reason was a decline into a cycle of trouble and punishments, over time these became more serious until it increasingly more difficult to break the downward spiral.

John himself concedes he was responsible for much of his problems, and therefore should be praised for taking responsibility for finding a way out of his personal hell.

Undoubtedly as John acknowledges, George played a vital part in John’s redemption by being a faithful companion and providing a  reason for him to stay on the straight and narrow.

This fascinating book illustrated by John’s drawings would appeal to people who want learn more about the  hidden London in which people have to find a way to survive but are often invisible to the wider population. It is also a reminder that many of the people we see who are homeless and down on their luck often have a background story that may explain their present predicament.

The book would  also appeal to those who like to read how people can surmount even the most serious obstacles to find some success and how pursuing your talent even in the most extreme circumstances can have a positive outcome .

If you would like to find out more about the book or buy a copy, visit the publishers website here