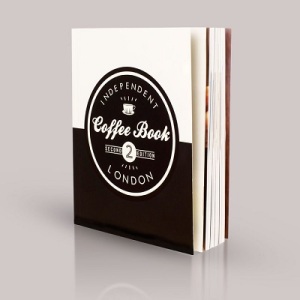 One of the attractive aroma’s of London is the smell of coffee from the numerous coffee shops dotted all over the Capital.

It is this revolution that is the focus of The Independent Coffee Book by Vespertine Press, a book that charts the rise of Speciality Coffee shops with the influx of predominately Australian and New Zealand entrepreneurs who wished to bring elements of the Antipodean coffee culture to these shores. These newcomers joined a number of home grown speciality coffee enthusiasts who attempted to turn a niche market into the mainstream.

Each outlet is listed with useful practical information and then a short history of the establishment and some of the characters who have been pioneers in the Speciality Coffee movement.

When reading about the various coffee shops it quickly becomes clear that the attention to detail  and expertise to produce a great cup of coffee, often produce similar qualities that make a great coffee shop. Lots of time and energy is used to make sure the ambience of the shop is inviting and a great area to be on your own or socialise.

One of the first shops listed is Association : City of London Coffee project which is considered amongst one of London’s best.

It is noted that David Robson the man behind Association has earned his Barista stripes at Prufrock  a legendary coffee shop founded by a world champion Barista .

This bring another theme to the book which is,  because  Speciality Coffee world in the UK was at the start relatively small, most people know each other and have often trained Barista’s who then set up their own outlet.

This creates a community feel in which people offer their skills and advice to others and learn from each other rather than seeing people as competitors in the Speciality Coffee market.

The second part of the book is a Coffee compendium , comprising information about coffee , its history and its place in London today. For those who know very little about the Speciality Coffee movement, (of which I would include myself) this section is invaluable to understand many of the terms and different aspects of the coffee making process.

Overall this is a wonderful little book that packs a lot of information into around 150 pages, it manages to de-mystify most of the Speciality Coffee world in an informative but friendly manner. Lots of attractive colour photographs are dotted throughout the book and a map at the back will lead you to some of the best coffee shops in London.

If you would like to find out more about this book or buy a copy , visit the Vespertine Press website here

By londonvisitors2014 in London Book Review - Non Fiction on May 27, 2014.
← The Romance of St Pancras Railway Station The Bridge Exhibition at the Museum of London Docklands – 27th June to 2nd November →