Book Review : An Appetite for Murder by Linda Stratmann 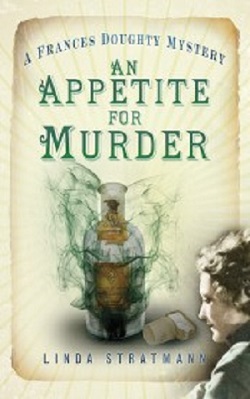 An Appetite for Murder by Linda Stratmann

The Frances Doughty Mysteries are a series of whodunits written by Linda Stratmann, set in Victorian Bayswater featuring a young female detective.

Frances used to help her father and brother run a chemists shop in Westbourne Grove until their deaths, however with her assistant Sarah she has forged a new career as a detective.

Considered a bit of a novelty in Victorian Bayswater, Frances finds support from the ladies of the Bayswater Women’s Suffrage Society, but opposition from the local police detective Inspector Sharrock.

An Appetite for Murder is the fourth Frances Doughty mystery and includes an interesting mix of Diet Doctors, Suffragettes and shady businessmen.

The novel is based in the respectable streets of Bayswater in 1881, the sudden death of overweight Thomas Whibley  sets off a heated debate between rival diet doctors. The debate descends into anonymous  and libellous accusations and Frances Doughty’s services are required to unmask the mysterious writers of these libellous letters known as “Sanitas” and “Bainiardus”.

Before she can delve into this mystery, our young lady detective is visited by a former  colleague of Mr Whibley, a Horace Sweetman who has just been released from prison after serving fourteen years for a crime he claims he did not commit and is seeking his estranged family.

At the end of the visit, the mystery deepens when the police arrive to arrest Sweetman for the murder of his wife.

The Frances Doughty mysteries in general and  this novel in particular has populated Victorian Bayswater with a series of almost Dickensian figures, however the writer’s real strength is make these characters rounded and credible.

Linda Stratmann has written several books about real life crimes  and this probably explains her ability to examine with great insight the seedy undercurrents of Victorian Society.

But the writers finest achievement is the characters of Frances Doughty and her assistant Sarah whose intelligence and sometimes brawn are bought into play time and time again.  What is particularly impressive is we are left in no doubt that Frances and Sarah are operating in a Man’s world and have to face the everyday prejudices associated with that.

It is significant that Frances keeps her calm in many dangerous situations but loses her cool when propositioned by a so called respectable gentleman.

Bayswater is an unusual and interesting choice to base the novels, although we probably see the area now as an area full of hotels and perhaps transient population, in Victorian London it was considered quite a wealthy area with good quality housing and plenty of quality shops.

Linda Stratmann’s attention to historic details allows you to get a real feel of this environment of the perhaps not “rich” but “comfortably off.” Of course this is the very environment in which white collar crime thrives behind the wall of  so called respectability . And it is this type of crime which is often difficult to detect as Frances quickly finds out first impressions can be deceptive.

This book will appeal to readers who like their mysteries based in a Victorian London full of interesting well drawn characters and who like to see a complex plot unravel slowly to an unpredictable finish.

If you would like to buy a copy of the book, visit the Visiting London Guide Bookshop here