The Old Bank of England

The Old Bank of England only became a pub in 1994 but is on the site of two old Taverns, the Haunch of Venison and the more famous Cock Tavern. The present building was built in the late 19th century as part of the Law Courts complex, it was the premises of Law Courts branch of the Bank of England. It traded as a branch the Bank of England until 1975 when it was taken over by a Building Society.

In the 1990s the Fuller’s Brewery took over the building and set about restoring it into one of their flagship pubs.

Although its history is interesting, this is not this pubs main selling point, the interior is stunning and provides a airy spacious space around a central wooden mahogany bar. The massive chandeliers add to the natural light through the large windows to illuminate the rich decor and ornamental ceiling. 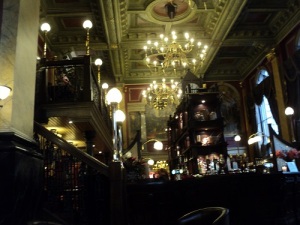 There is a gallery where you can drink or eat overlooking the bar. There is a good selection of beers on tap and the perhaps better than average pub food available. 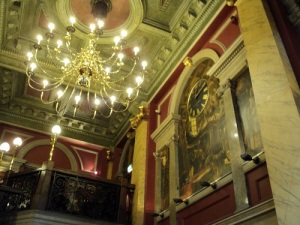 The pub mentions the disputed claims that it lies Sweeney Todd Barbers shop and Mrs Lovett’s Pie Shop, although this might add a bit of local colour it does not encourage you to try the pies on the menu!